A lot of persons with blonde hairs ... considering the board size, they're likely occupied in a game of Rithmomachia.

The association of the Cassone picture of Scheggia with the Alessandro Sforza Temperance card came up with the observation of the way, how the painter handled the breasts in both cases (in combination with the blonde hair). And from the condition, that Scheggia made indeed playing cards in 1447 and that he was related to the Medici (birth tray of Lorenzo in 1449). And a little bit, cause the brother Masaccio made the Adam-Eve motif in a manner, that reminds the Tower scene in Minchiate.

... make not enough to be related.

There was a fashion with blonde hairs. The ladies made complicated operations to get it done.

Something else ... there were two courts cards with great similarities to the Fante of the Charles VI Tarot, which had appeared as a new finding some years ago. As far I remember, there was also an IPCS article ... we had the pictures. But I don't know, where these pictures are.

Actually these pictures should be part of our discussions, and also this article. Does somebody remember? 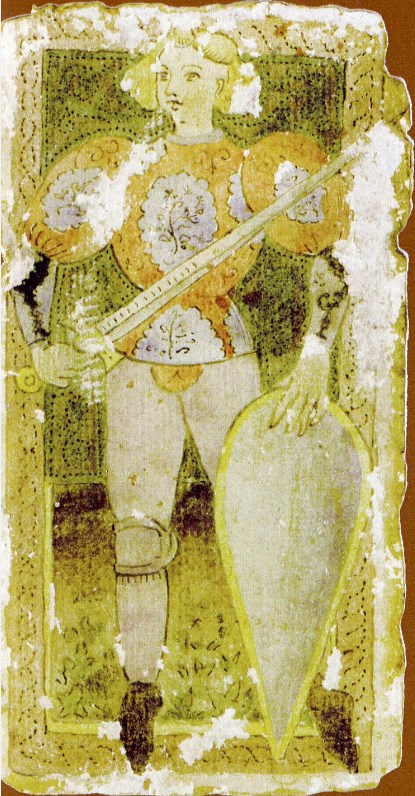 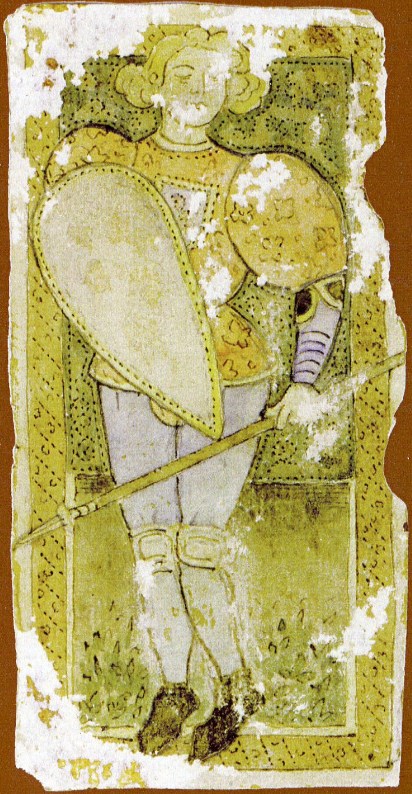 I remember, that the web had also other pictures, where they didn't look so yellow, I remember more grey.

The Fante of Swords is clearly similar to the Charles VI Fante of Swords, but it's not the same. The size is considerable smaller, Depaulis gives 135/139 x 70/74 mm against 180/185 x 90/95 mm for the Charles VI. The Charles VI has a hidden paper wrapped around the border of the cards, which these smaller and cheaper cards have not. 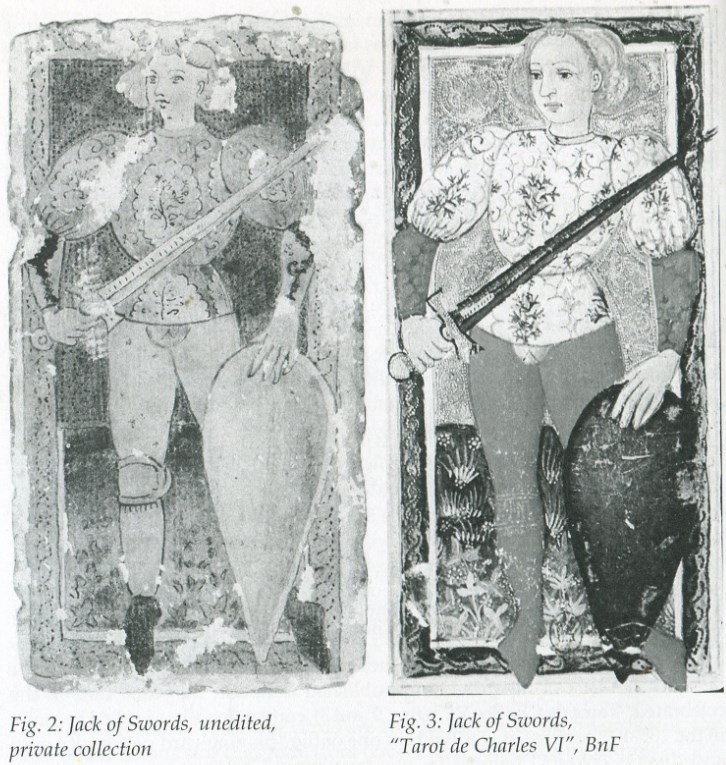 ...given that I'm proposing the 'AS' was given to Costanzo in 1475 at the time of his wedding, thus the relevance of the festival book,...

It must also be given, not as anyone's proposal but as fact, that the years "1428" and "1429" appear written on the paper recycled for use in the middles of two of the "AS" cards, in what appear to be notarial acts. For details see my post at viewtopic.php?f=11&t=1112. I suppose that they may be references to events in those years on paper made later, I cannot imagine that paper would be left sitting around unused for 46 years, but I don't know the frequency in which dates of that vintage occur in 1460s or 1470s notarial acts.

Thanks for the reference to Depaulis's article, Huck. I notice that Depaulis dates his two cards to the 1450s-1460s, saying that the clothing style is mid-century and noting similarities to a Mantegna Martyrdom of St. Christopher of 1449 Padua and the Gonzoli Procession of the Magi of 1459-1462 (https://askalexander.org/display/22536/ ... an%20cards). More recently, in the article cited in my post linked to above (not yet online), Fiorini has made credible (although not proven) an even earlier origin for the Catania cards.

Depaulis points to the javelin as a suggestion of an earlier time for his cards than the CVI, which has a baton. The javelin is more similar to the CY's lances.

23 by Huck
If one assumes, that the paper was indeed used in 1428, then it still could have been used (when there were no actual interest to beware the documents for the future) as filling material for book bindings and other interests much later. We don't know, how sure the dating is. The name Trionfi didn't occur as evidence for playing cards for "before 1440" till now.
"Papier ist geduldig" is a German proverb (paper is patient).

Notaries likely had some laws to keep their acts papers for some time, but if a notary died or the business was closed, what happened to such paper? It was recycled, if nobody found it necessary to beware it.
It would be interesting to know the location of this paper, not only the dates.
Huck
http://trionfi.com

Huck wrote: There was a fashion with blonde hairs. The ladies made complicated operations to get it done.

Blonde hair as fashionable goes back to the Trecento Italian aping of French courtly tradition (why most court figures are inevitably blonde). See Charles Dempsey's first chapter - "Courtly Lyric: Simone Martini, French Courtly Lyric, and the Vernacular" - in his The Early Renaissance and Vernacular Culture (Harvard: 2012). I.e., no reason to make a big deal out of blonde hair.

Likewise dated scrap paper adds nothing (besides the earliest date, which is impossible given Alessandro's imprese) to the issue of the possible relationship of the Costanzo wedding festival book and the "AS" deck.

Huck, those other court cards from a related deck are certainly interesting, but the extreme paint loss and lack of imprese do not help much.

Huck wrote: There was a fashion with blonde hairs. The ladies made complicated operations to get it done.

Blonde hair as fashionable goes back to the Trecento Italian aping of French courtly tradition (why most court figures are inevitably blonde). See Charles Dempsey's first chapter - "Courtly Lyric: Simone Martini, French Courtly Lyric, and the Vernacular" - in his The Early Renaissance and Vernacular Culture (Harvard: 2012). I.e., no reason to make a big deal out of blonde hair.

Likewise dated scrap paper adds nothing (besides the earliest date, which is impossible given Alessandro's imprese) to the issue of the possible relationship of the Costanzo wedding festival book and the "AS" deck.

Huck, those other court cards from a related deck are certainly interesting, but the extreme paint loss and lack of imprese do not help much.

I made a comparison once between Alessandro Sforza cards and CVI.
The hair difference makes a point there. It's not the same blonde and the hairs are styled in a different way.
viewtopic.php?f=11&t=1112&hilit=palermo#p17326

On the two additional Depaulis cards one can see details at the rest of the figures, which are not part of the shield, at the shield we have no recognizable details. Btw Depaulis notes, that these cards are not printed, he assumes, that they are completely hand painted.

It's a relative common phenomenon, that 15th century heraldry figures appear prepainted in books or manuscripts, but that heraldic details, which point to the owner, are not filled in these general schemes. The same might have happened with cards.
Huck
http://trionfi.com

26 by Huck
Franco Pratesi gave notice, that he saw at an exposition in the Palazzo Davanzati 4 Petrarca Trionfi (Amore, Morte, Fame and Eternita) made by Scheggia.

At this webpage I found a video to the Scheggia objects.
https://en-gb.facebook.com/pg/bargellom ... e_internal

The video was announced here, together with a picture of Fama:
https://www.ansa.it/toscana/notizie/202 ... b862e.html 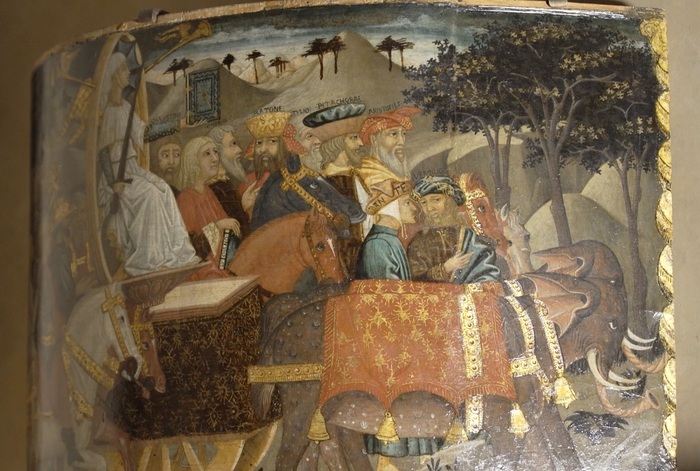 Another view, the same object 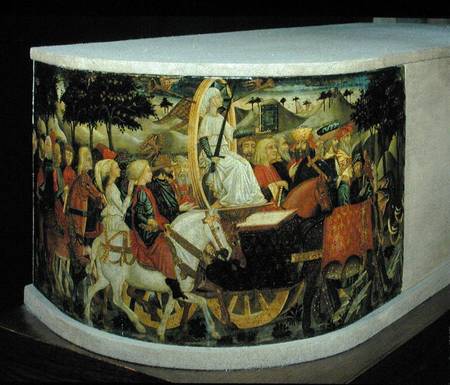 I found one of the pictures at wikimedia commons:

Another view, the same object 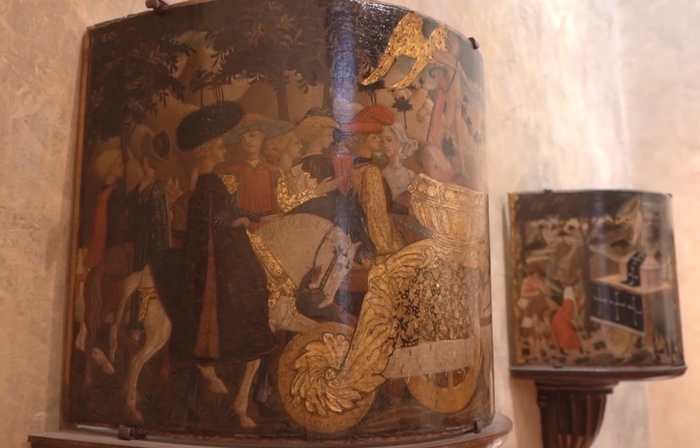 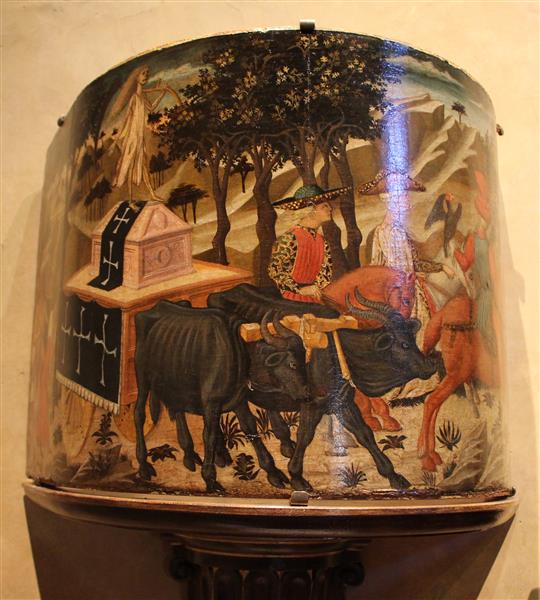 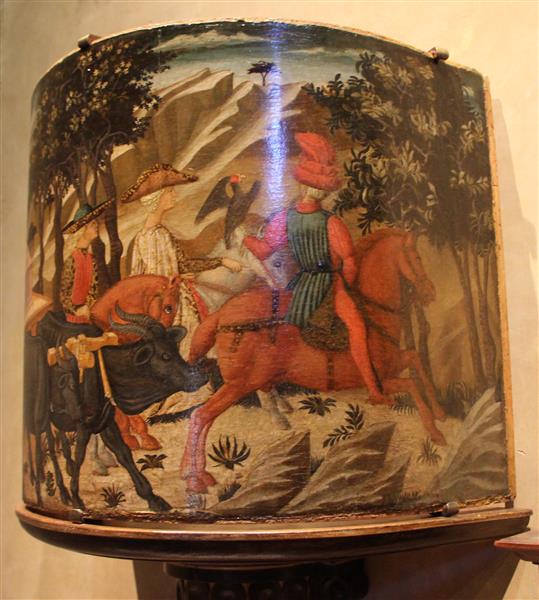 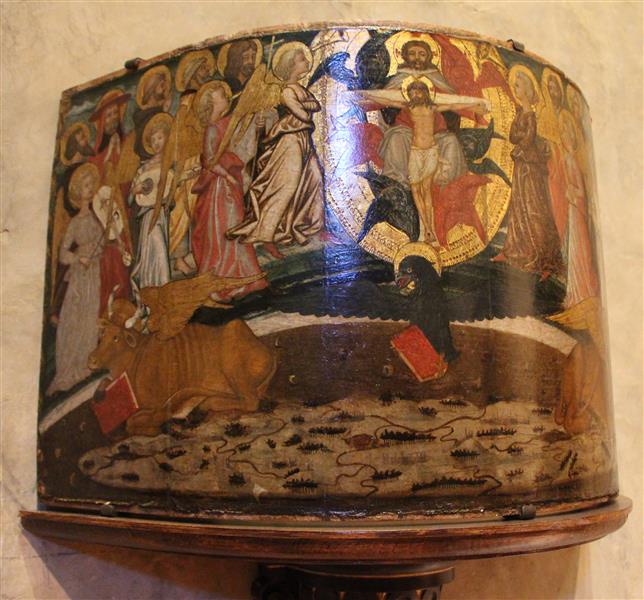 
There are opinions, which regard these objects were decorations to a "chamber of Lorenzo" in 15th century.

27 by mikeh
See also viewtopic.php?f=11&t=858&start=60 (Feb. 2013), which I wrote in relation to the Scheggia cassone lid (previous post in that thread), also viewtopic.php?f=11&t=1092&p=17655&hilit=Scheggia#p17655 (in 2016). I saw the set of four at the Accademia in Florence, in perhaps 2014, or whenever my second to last trip there was. I suppose I should have linked to this thread, but there are so many. Well, I do so now. There was a catalog with more to say. I didn't buy it, as it was pretty heavy. Perhaps it is still available. I vaguely remember photographing the relevant pages (photographing the objects themselves wasn't allowed). I will look.

Actually the trionfi are in the Palazzo Davanzati.

On a related note I got the chance to see the Scheggia in the VA Fine Arts Museum in Richmond over the 4th holiday. Judgement of Solomon on the obverse and Hope on the back.

[is there a reason the "attachments/add file" function is not working here? Will upload elsewhere and link from there...] What never occurred to me before is that in the CY the crown is not hovering before the hopeful devotee (as in Giotto and Scheggia above) but is on the virtue. Of course the theologicals drop out so there are no more comparables. Perhaps Visconti's court artist found it appropriate for these virtues to be regally attired, in keeping with the additional female court cards in that deck? Although note the ermine-lined robe on the Scheggia, so the theologicals were always going to be elevated in status in some way. But the hovering crown indicated an aspirational aspect (i.e., hoping for grace to be given) - in the already crowned one in the CY it is a defacto given (she looks at the Visconti radiant sun in the upper right which shines down its blessing). Perhaps simply part and parcel of the bon droit lens through which the Visconti regarded themselves - all of the virtues were inherent in them. By contrast, the arriving knight in the CY "world" seems to be having virtue conferred on him by the orb-holding virtue hovering above him on a crown (and the dress of both virtues is essentially identical: fur trimmed dark robes with red sleeves appearing through the robes; Faith and Charity are in gold robes in the CY). That would suggest the knight - whatever his virtue - was not a Visconti, and if nothing else, puts him back in the 'aspirational' class with the crown above him (in my view, he is being crowned with prudence - with which Sforza would rule over Cremona - for which his fame would be known for...after marrying a Visconti).