71 by Phaeded
Huck,
Of course I disagree with your chess theory but I have asked that you provide meaningful evidence for chess in the decades before 1440 in Florence...here you go (the reverse of a birth tray from c. 1410): Phaeded wrote:Huck,
Of course I disagree with your chess theory but I have asked that you provide meaningful evidence for chess in the decades before 1440 in Florence...here you go (the reverse of a birth tray from c. 1410) ...

Well, good idea for such a boring birth tray, hanging usually at the wand and having only decorative function. And no game persecutor gets the idea, that it should be burnt.

Did you look for evidence, that Chess existed in 1410?
Huck
http://trionfi.com

Huck wrote:
Did you look for evidence, that Chess existed in 1410?

That's your job, my friend.

I was looking at various themes on birth trays (mainly in regard to Scheggia; went through M. Haines' Italian monograph on him this weekend) and then on-line again when this chess birth tray popped up (I think I muttered your name as soon as I saw it ;-). Significance to me is fairly straight forward: I can only imagine that "mom" gets bored lying around in bed, post partum (as is depicted on the obverse of that Harvard-owned birth tray), and would love a diversion such as chess. You might want to run down whose coat of arms those are however (although the one on the left is stupidly obscured by museum labeling).

At the moment I'm more intrgued by this Scheggia depiction of a sibyl(? the vague on-line descriptions call her an "oracle") as she has the trumpets of fame and pointed halo of Virtues with the painted starry ceiling portico of an Annunciation; all rather odd:

So what is the relationship of this image to the other non-Virtue, Fama, also wearing a pointed virtue halo in Scheggia's Lorenzo de Medici birth tray? Fama, in its use on the Lorenzo birth tray, Prudence and the oracle/Sibyl are all future-oriented...thus an argument for the conflation of Fama with Prudence, i.e., "the World".

At all events I'm leaning towards a theory of Scheggia as the likely painter candiate of the earliest trionfi deck in 1440 (certainly interesting in light of Pratesi's find of him and a deck he pained in 1447). He did the cartoons for the intarsia vestments cabinets in S. Maria Fiore from 1435-1440, thus freed up at precisely the right time and in connection with something specifically lit up - the S. Maria Fiore dome - for the Anghiari celebrations.

That's your job, my friend.

I didn't note, that I have a job.
Lo Scheggia made playing cards in 1447 and these were not especially expensive. For expensive decks around 1440 we've for the moment Antonio di Dino (5 decks in 1441) and Simone di Ser Antonio Fazi (4 decks in 1437).

But that's here a chess variants thread and NOT the Anghiari thread.
viewtopic.php?f=11&t=888&start=20
Huck
http://trionfi.com

Normally, the tale of a chess game ends with the capture of a king.

The story of this unique piece of gaming history, however, starts with the execution of one.

Chess enthusiast King Charles I of England, to be precise, who went to see the executioner in January of 1649 after being found guilty of high treason. When he went to meet his maker, he took with him two treasured possessions: his Bible, and this amber chessboard, which this week sold at a London auction for a record £601,250 -- almost $970,000.

Looking for chess items at Sotheby I found ... 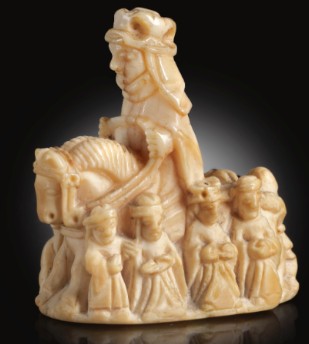 The first queen above was sold for 277,250 GBP ... well, a proud price for something with the height of 6,7 cm. Around the value of very expensive Trionfi cards occasionally. In comparison to that the price of of a complete chessboard with Nine Men's Morris at the backside and backgammon board with men at the inside connected to the tragical of an important British king (which should increase the price, of course) looks indeed cheap: only around 600.000 pounds.

It had been already earlier pointed out, that Cary-Yale Emperor and Empress had similar features (accompanying figures) as some old chess Kings and Queens:
viewtopic.php?f=11&t=585&p=10256

77 by mikeh
Reading a book called The medieval heritage of Elizabethan tragedy (1936), by William Farnham, I noticed a description of a play that seemed to be modeled on the chess pieces, as in Echecs moralise. Here is the paragraph, from Chapter 5, "The English Morality Play," pp. 181-182:

As it happens, the first extant English morality, a fragmentary play known as The Pride of Life (ca. 1400), has the coming of Death as its dominant theme. Though Death does not actually appear in the opening part of the drama, which is preserved to us, we know that he did appear in the complete drama, because a summary of the action is given in the prologue. At the opening of that action we find the King of Life living "in pride and likinge." In the sufficiency of his power he takes boasting delight. His faithful supporters and companions are his knights, Strength and Health, and his messenger, Mirth. He also has for Queen a beautiful lady. With her beauty the Queen unites wisdom, and she warns him that he must think upon his ending, must live well in order to die well, for Death will surely come to him. Death spares neither knight, nor kaiser, nor king. Let him leave pleasure, she pleads, and save his soul. He calls all this an old wives' tale. The Queen sends for the Bishop, who adds preaching to wifely petition. Bishops should preach in church, says the King; and he sends his messenger, Mirth, to proclaim that he dare fight with anyone, even Death. (At this point the fragment ends, and we must complete the story by means of the prologue.) Death in turn sends his messenger to the King of Life to say that he will come to try his might. Death does strive with the King of Life and deals him a deep death-wound. Then, when the King's soul leaves his body, it knows great sorrow and is caught by the fiends. but Our Lady will pray to her son for the soul's release.

It seems to me that the Bishop and Rook on the other color square from the King (presumably black) could be Death and his messenger, with the other Rook as Mirth. The other pieces are self-explanatory, except the Lady at the end, who is simply the Queen after the game is over. The Queen seems to be the weakest piece, but also the most enduring. I don't know what relation this story would have to actual chess at this time, probably not much else.
mikeh
mikeh 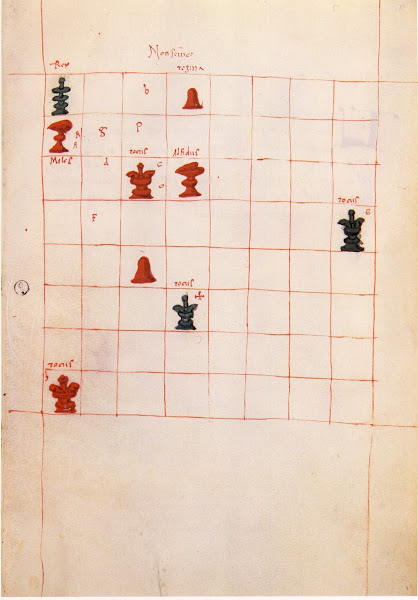 This is fol. 11 of Gilio de'zelati di Faenza's Partiti de gioco de scachi (Chess games), Turin, Biblioteca Reale, varia 128. The title is taken from the preface; it is dedicated to Borso d'Este, Duke of Ferrara. I get it from p. 151 of a book called Treasures from Italy's Great Libraries. The blurb accompanying the illustration says there are 23 illustrations in all, each devoted to a game. It continues (p. 150):

Six of the illustrations appear to have been designed by the author himself.

On the recto of each leaf there is a chess board drawn in red ink. It consists of a 12 cm square divided into smaller squares. The pieces are shown in the squares, with the white pieces painted in red and the black in green. Each piece is given its Latin name, and letters of the alphabet show the moves to be executed; several errors in the places of pieces have been corrected with the word 'vacat', to indicate that the square should be empty. The text explaining each game is set out on the versos, facing the illustrations.

79 by Huck
Arimaa is a new chess variant (2002), which gained some public attention

Arimaa was invented by Omar Syed,[1] an Indian American computer engineer trained in artificial intelligence. Syed was inspired by Garry Kasparov's defeat at the hands of the chess computer Deep Blue to design a new game which could be played with a standard chess set, would be difficult for computers to play well, but would have rules simple enough for his then four-year-old son Aamir to understand.[2] ("Arimaa" is "Aamir" spelled backwards plus an initial "a").

There is a $10,000 prize, available annually until 2020, for the first computer program to win the human-versus-computer Arimaa challenge.[3] As part of the conditions of the prize, the computer program must run on standard, off-the-shelf hardware.[3] As of 2013 the prize has not been claimed.[3]

Well, how to win the game:


There are three ways to win the game:

Move a rabbit to the eighth row of the board.
Capture all enemy rabbits.
Deprive the opponent of legal moves.

The rabbits are the pawns.There are 8 of them. Otherwise the game has 1 elephant, 1 camel, 2 horses, 2 dogs and two cats. Each piece has the same moving capabilities, beside the pawns. With each turn a player may move 1-4 steps pieces at the board in vertical or horizontal direction.
There are 4 fields at the boards, where one can capture foreign figures. Strong pieces (elephant for instance) can "push" or "pull" weaker figures (for instance cats). The push and pull rules are complicated, you better study them at the website ... :-) 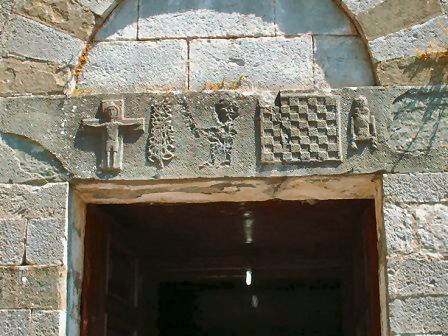