483 by Huck
Louis or Ludwig Passarge (1825 - 1912) describes a large stone in his "Heimat" (Wolittnick, district Heiligenbeil in Ostpreußen), in which playing cards together with a horseshoe, a wine glass and a cake were inscribed in the stone to remember a story with the devil and persons, who once played with playing cards on this stone. The devil took the persons to hell. Likely such large stones ("Findlinge") were related to old pagan rituals.
author: https://de.wikipedia.org/wiki/Ludwig_Passarge
source: https://core.ac.uk/download/pdf/14497904.pdf .... at page 88 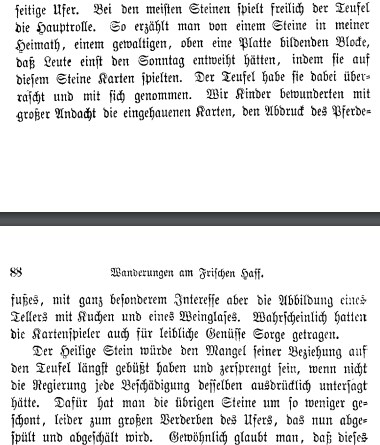 https://de.wikipedia.org/wiki/Findling .... example of such a big stone

I searched for "Teufelstein" and found, that there seems to be various locations with a Teufelstein, which mostly is a Findling.
Huck
http://trionfi.com

The title is: "Die Dame im Spiel" (The Lady in the Game) with the subtitle "Spielkarten als Indikatoren des Wandels von Geschlechterbildern und Geschlechterverhältnissen an der Schwelle zur Neuzeit" (Playing Cards as indicators of change in gender pictures and gender relations at the swell of modern age).

Huck,
Did you ever get a chance to check out or acquire this work, besides the 95 some pages scanned on Google? I've been rereading JvR's earliest card games, some of which include queens, so it would seem almost immediately there was a need to interpret the Mamluk top cards as deficient in not having a woman, which in Medieval Europe was critical due to it being a possible means of acquiring the husband's dominions (hence a wife's stemma usually present in various works of art to depict marital unions). Otherwise there are clearly games which were straight interpretations of Mamluk decks with three men as the court or "Hof".

I'm not sure why Wörner leads with the PMB when clearly the Visconti must have been influenced by early German luxury decks, discussed here:
viewtopic.php?p=22234#p22234

The Stuttgart (c. 1430) solution was simply to make the three males of the court into women in two of the suits, to better match the wooing rituals of the courts one would presume. This would post-date Marziano but predate the CY, but its hard to believe it was an innovation and did not exist even earlier. At all events, the insertion of a female (or more) into a suit was clearly the European innovation early on, after the reception of the Mamluk decks, and Wörner is right to highlight this.

485 by Huck
If one believes John of Rheinfelden, then there were in 1377 decks, which had had only women as court cards.

There's in chess and its many variants the condition, that Eastern countries didn't have a Queen, but other figures. Only the European countries had a Queen in chess ... so it looks to me, but I haven't controlled this completely.
For the first note about the Courier game in the Wigalois (c. 1210) we have the condition, that the women had the Courier game between their things, not the men.
There's some suspicion, that Theophanu, mother of Otto III, brought chess to Germany. There's evidence of chess in Einsiedeln in Switzerland and a very old chess poem (10th century). Otherwise chess is then and before known in Cordoba, which was in this period possibly the largest city in Europe.
In the Courier game there is a specific opening, which involves the Queen. A similar curiosity appears in the chess variant "short assize" ... 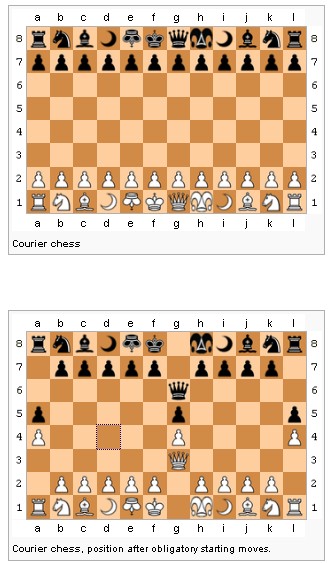 
Both variants appear very early. Somehow possibly a sign, that female players were involved in the studies of early chess.

In the run of general history we have the curious condition, that there was a long time a male emperor in Constantionople ... then it happened, that Irene became empress ...
https://en.wikipedia.org/wiki/Irene_of_Athens
.... and it happened, that Charlemain in Aachen claimed to become an emperor himself.
Has these events an influence on the development of the European chess Queen?

It seems to me, that Ulrike Wörner overlooks the condition, that chess preceded the playing card development. When I type "Schach" in the search engine of the book text, I get enough notes about chess, but nothing, which reflects the missing Queen in Asian chess versions. When chess entered Europe, the probable ways would have been either Cordoba or Constantinople.
When I type Courier, Currer or Kurier in the book search engine, I get zero results. Evrart Conty is also negative.

The book is a dissertation, 39 Euro.

The author in an interview .... 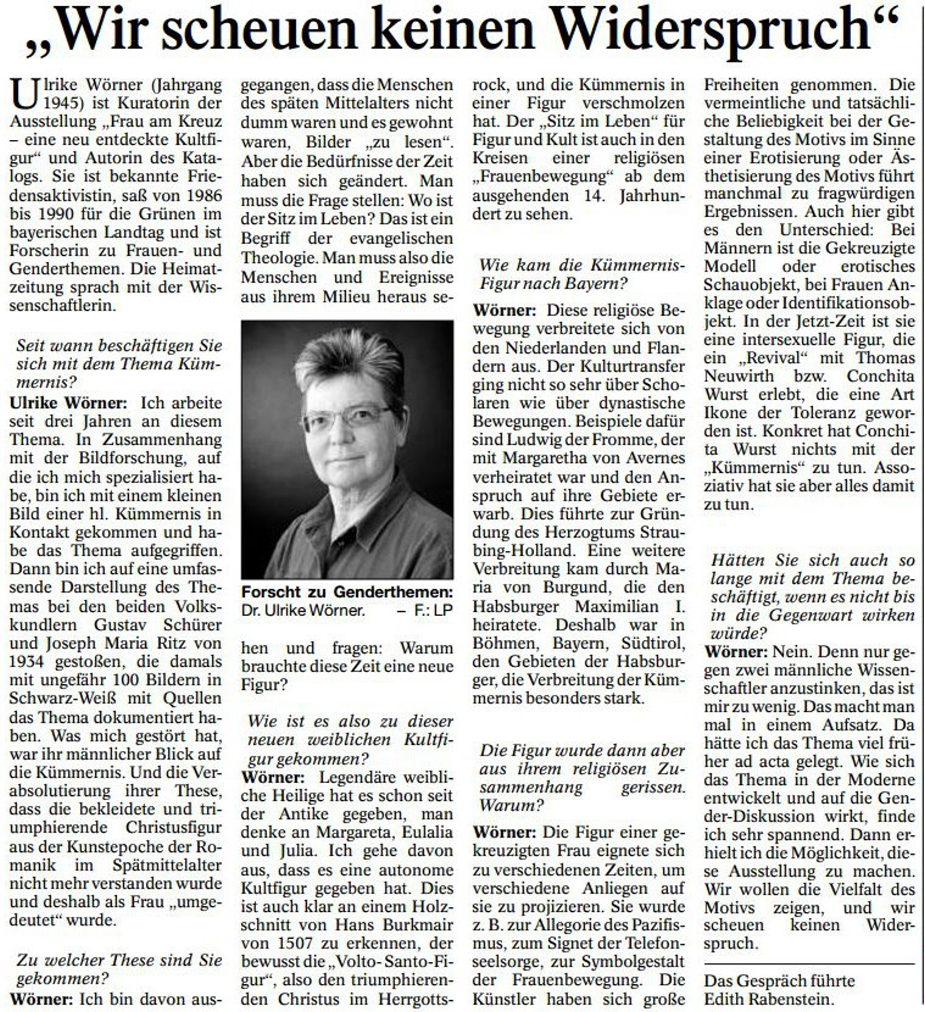 There's in chess and its many variants the condition, that Eastern countries didn't have a Queen, but other figures. Only the European countries had a Queen in chess ... so it looks to me, but I haven't controlled this completely.

Ask any question, and the answer is always the same: chess.
;-)

Its fairly inconceivable that Islamic culture would have ever featured a female court card. On the flip side, women in cards are not an expression of chess - chess is rather potentially one expression of Courtly Love, something represented over and over in European representational art (and of course Islamic art largely only shows decorative motifs, interwoven into which we find cups, polo sticks, etc.).

On the other hand there are Arab texts on surviving Mamluk cards (that a bilingual knight or messenger could have interpreted) that do point at courtly love themes. The calligraphic texts along the tops of the cards consist of rhyming aphorisms “With the sword of happiness I shall redeem a beloved who will afterwards take my life", “O my heart, for thee the good news that rejoices”, etc.

If the three Mamluk "court" figures don't even look like people (essentially the prototypes of the king, over and under knaves), yet courtly wooing could be associated with them then the change in gender is then not wholly unexpected. The single queen of chess is not needed for the explanation for why women get added to cards. The source of cards, Mamluks, and writing thereon, is of course the best explanation, coupled with the Courtly Love pervading 14th/15th century Europe.

Angelo Poliziano and Pico della Mirandola, two princes of the Renaissance culture, were poisoned with arsenic by the same killer, within a few weeks of each other, in the last months of 1494. And the killer now has a name: that of Pico della Mirandola's personal secretary, Cristoforo da Casalmaggiore, who perhaps acted in complicity with his brother Martino. Mentioned in Pico's will with strong bequests, the two brothers were linked to Piero de 'Medici; both were papists and had a strong hatred of friar Girolamo Savonarola. And among the instigators of the double murder the suspects were Piero de 'Medici, Pope Alexander VI and the philosopher Marsilio Ficino. The thesis is supported by Silvano Vinceti, president of the National Committee for the enhancement of historical, cultural and environmental heritage, who today in Florence, at Palazzo Medici Riccardi, presented the results of a historical-documentary research concerning the murder of Poliziano and Pico of Mirandola. Vinceti based his hypothesis, among other things, on the re-reading of the forgotten diaries of Marino Sanuto, a Florentine chronicler of the end of the 15th century. On the same occasion, Vinceti presented the physiognomic reconstruction of Poliziano's face in hyper-realism, made by Chantal Milani. Vinceti's historical-documentary research originated from the scientific investigation carried out in 2008 which revealed the presence in the bone remains of Pico della Mirandola and Poliziano of ´`a very high quantity of arsenic not attributable to the normal medical use of the times`. Until now it was believed that Poliziano had died on 29 September 1494 due to syphilis and that Pico had also died of the same disease on the following 17 November of that year. As for the possible instigators, namely those who would have armed the killer's hand with poison, the list of suspects according to the research of Silvano Vinceti leads first of all to Piero de 'Medici, son of Lorenzo the Magnificent, who had a strong hatred of Poliziano. The research carried out on the bodies of the two humanist illiusters also made it possible to identify some curiosities: Pico had large and robust bones, with strong muscles, a large skull with a pronounced chin and suffered from a fairly frequent foot defect, known as `` toes a hammer; Poliziano, on the other hand, was short, frail, with a pronounced nose and most likely suffered from an anomaly in his neck. The remains of Pico and Poliziano are found in the Basilica of San Marco in Florence.

Reproduction of a late 18th century tarot deck, with imagery far removed from the 'Marseilles standard.' Imagery includes a swan-enamored woman on the 'Lovers' card to a baby-rescuing soldier on the 'Hanged Man' card. The title translates as '18th Century Arcana.' Published in 1991, in a limited edition of 1,000 copies.

If it is indeed late 18th century, it would be nice to find further details ...
Huck
http://trionfi.com

490 by Ross Caldwell
I have that deck from Il Meneghello. There is no further information, no little book nor even a card with historical information.

22 trumps, that's all. It doesn't look like late 18th century to me, the font style at least. And being 22 trumps only is suspiciously post-occultist, which pushes it toward the 19th century. But I have no other basis for doubting the "late 18th century" than that.