20. July 1304 was a Sunday. Petrarca was born in Arezzo as Bruni ... who wrote a biography of Petrarca in 1433 and cared for the condition, that Petrarca was seen as a Florentine scholar and poet (though he spend only very few time on Florentine territory . .

Wiki: "Nel 1384, dunque, Arezzo fu annessa allo Stato toscano dominato da Firenze."
In 1384 Arezzo was integrated in the state of Tuscany, which was dominated by Florence. Not all people in Arezzo were happy about that.

Petrarca was crowned as poetus laureatus 8th of April 1341 in Rome, which should have been a Sunday.

Petrarca died with 69 years and 364 days, which means that he died one day before his birthday ... possibly there were preparations to celebrate his 70th birthday.

If one considers the possibility, that the invention of the name "Trionfi" for a specific playing card deck type had something to do with "Trionfi", the long poem of Petrarca (which still wasn't totally finished at his death), and the condition, that the structure of this deck type might have been in its beginning "5x14=70 cards", then we would have a funny observation of the coincidence of this real "nearly 70 years" and the "possible 70 cards", about which we have talked so much about.
Huck
http://trionfi.com 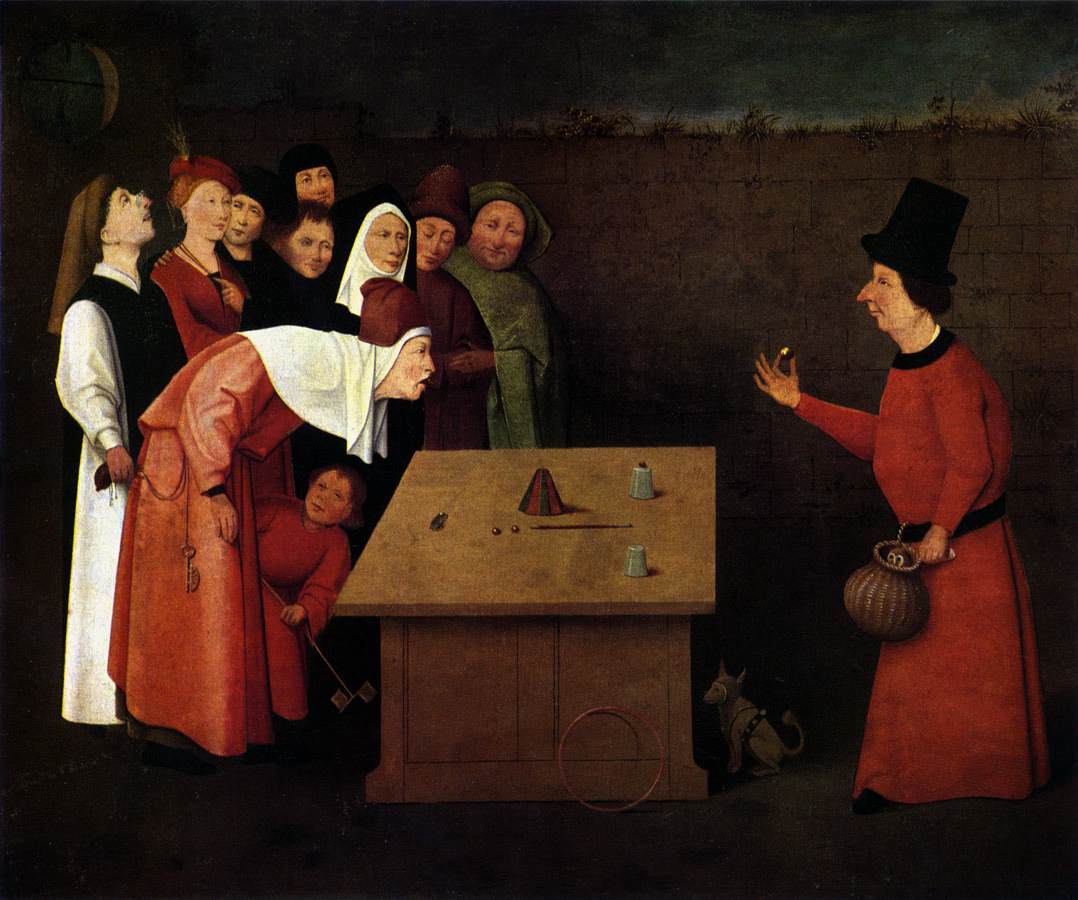 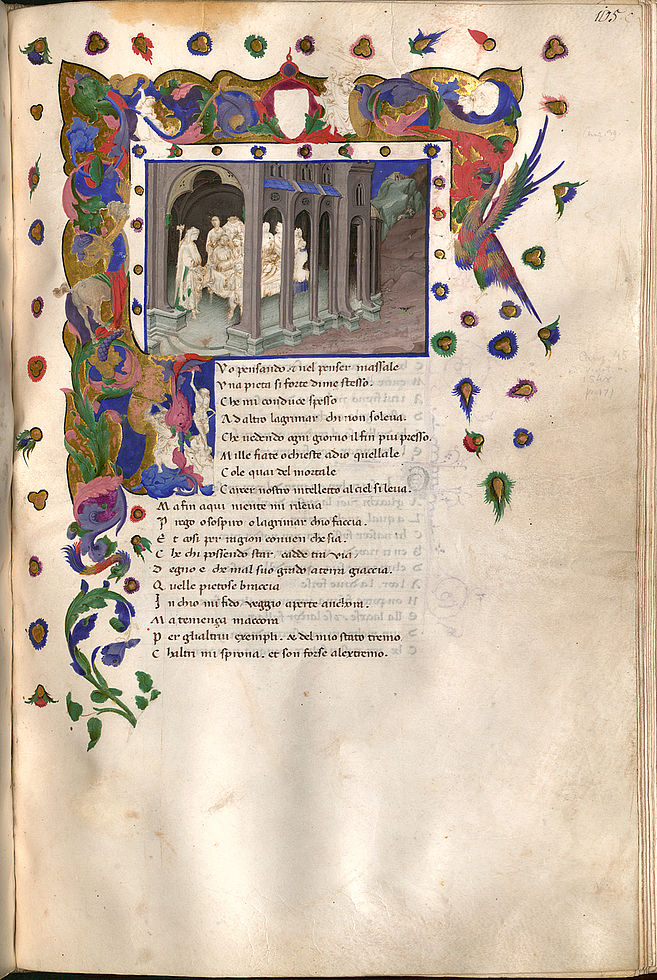 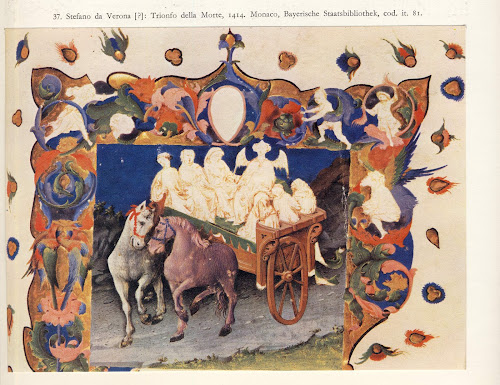 P. 297 is interpreted by the 297 picture above and by an internet catalog as a Trionfo della Morte, but it looks like a Trionfo for Fame (the major figure is winged; Fame was winged). Perhaps the question could be solved, if one visits the relevant pages in the above mentioned edition of the Bayerische Staatsbibliothek.
If one clicks the link, the book opens. One needs to open the relevant pages 215/297 by using the page selection. This is hidden behind a sign at the right top, which looks like a book (first sign of 4 at the left, then another mini-window opens and you have to select "Galerie").
Page 215 is interpreted with "Petrarca with the dead body of Laura". This looks like a Trionfo della morte.

The picture at page 215 presents a Petrarca Sonetto 264 parafrasi
https://www.appunti.info/petrarca-sonet ... #gsc.tab=0
It isn't part of the Trionfi text.
I cannot copy from this page.
Huck
http://trionfi.com

464 by Huck
Peter Mark Adams ...
petermarkadams.com/
... published a book abbout the Sola-Busca Tarot in 2017 and got a prize "Esoteric book of the year" for it.

I detected a snippet version of "The Game of Saturn: Decoding the Sola-Busca Tarocchi" at books.google.com
https://books.google.de/books?id=CPsGEA ... navlinks_s
Huck
http://trionfi.com

465 by Huck
German texts to the history of the court Fool:

467 by Huck
Franco Pratesi got an article at the English wikipedia. Trionfi.com was not involved.

German google presented the wikipedia article with a wrong photography in the search engine results. It seems, that this belongs to another person with the name Franco Pratesi.
Huck
http://trionfi.com 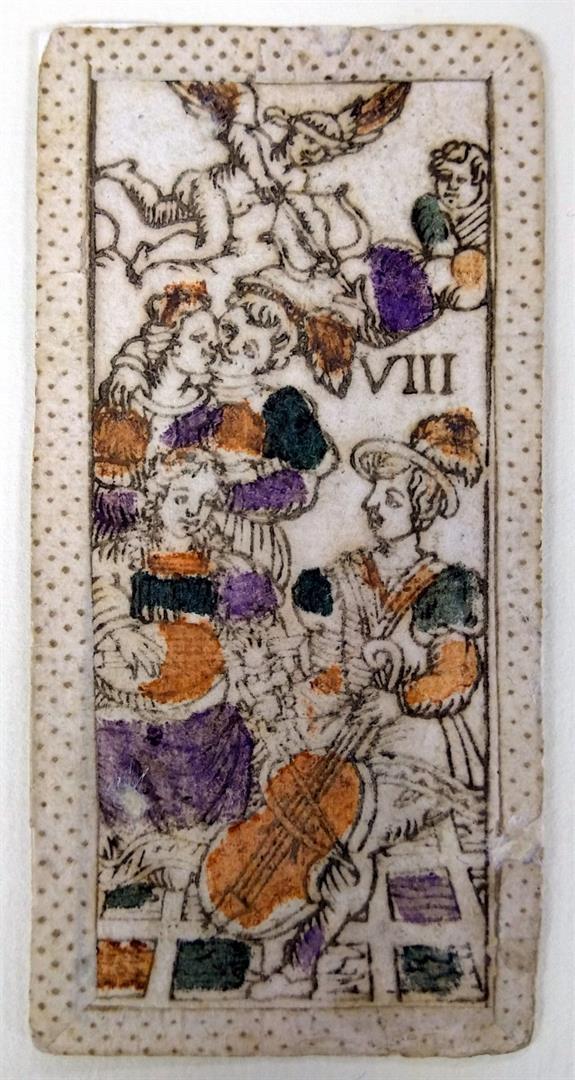 The other pictures are at the same link, which presents all the pictures, some data and an Italian text ...

Automatic translation of the text ...

This purple, orange and green colored playing card is a triumph and represents love. It is numbered VIII and has an articulated composition: two musicians play in the foreground, behind them two lovers kiss, Cupid flies up in the act of shooting an arrow and next to him is another character who is difficult to identify. The scene has also been interpreted as the wedding banquet between Ruggiero and Bradamante, the two warriors who gave rise to the Este family.
The back has also been preserved, a larger woodcut folded along the edges of the playing card depicting Cupid (ALU.0791.1).

The woodcut belongs to a group of ten playing cards made known by Vittoriano Facco and later studied by Michael Dummett, Stuart R. Kaplan and Giordano Berti.
The cards belong to two different decks: nine, including this one, have the same back with Cupid playing the viola, while one has a landscape with two palms and slightly larger dimensions as its back. The nine-card deck includes four trumps (love, hangman, star and sun; ALU.0782 - ALU.0785) and five number cards (seven of swords, eight and nine of cups, seven and eight of sticks; ALU.0786 - ALU.0790). The card that has the back with the landscape is a seven of swords, a different woodcut but very similar to the other seven of swords in the collection (ALU.0792). The ten cards were probably all produced in the same shop, as is also suggested by the similar stylistic characteristics of the backs (see ALU.0791.1 and ALU.0793) and the similar coloring.

If the number cards are very essential and have no decorations, the four trumps are rather refined for this kind of production and have a particular iconography. In fact, with the exception of the hanged man, they have references to Ludovico Ariosto's Orlando Furioso. Triumph XVI (ALU.0784, probably the star) sees a dressed and a naked man engaged in a fight on a bridge, while in the background stands a mausoleum. Kaplan interprets the scene as the fight between Orlando in the grip of madness and Rodomonte and the building in the background as the tomb erected by Rodomonte for Isabella (Orlando Furioso, canto XXIX). Triumph XVIIII (ALU.0785, probably the sun) sees a naked man uprooting a tree near a fountain. According to Kaplan it is a madman Orlando who uproots trees after learning of the love that binds Angelica to Medoro (Orlando Furioso, canto XXIII), in the fountain he sees a reference to the fountain of hatred and that of love of the Orlando Innamorato di Matteo Maria Boiardo, a fleeting reference that Dummett drops. Triumph XVIII depicts love and sees a couple kissing while two musicians play and Cupid shoots arrows (ALU.0782), it could be the marriage between Ruggiero and Bradamante, in this case the reference to the poem is less stringent than the two previous triumphs (Ariosto, canto XLVI).

Scholars have reported the tarot deck with a Venetian or more probably Ferrara area (Kaplan, Dummett and Berti) both for the particular Ariostesque iconography (proposed by Kaplan and accepted by Berti and Dummett), and for its typology (type B order ). The landscape with palm trees depicted on the back of one of the cards must be identified as the emblem of the Marquis Ermes Stampa di Soncino, who adopted it from 1543 and died in 1557 (see ALU.0793). This circumstance leads us to be cautious with respect to the place of production of the group of cards, perhaps from the Veneto region, and allows us to specify the date around the middle of the 16th century.

469 by Nathaniel
That website, the Atlante delle Xilografie italiane del Rinascimento, is well worth exploring generally. They have a huge number of high-quality images of 16th century Italian cards, which you can find by searching for "carta da gioco" (as I have done in the link). You can also look at many other woodcut images from that period.

John McLeod, co-Author of Michael Dummett for the book about Tarot rules.
A History of Games Played with the Tarot Pack
The Game Of Triumphs
by Michael Dummett and John McLeod
http://www.tarotgame.org
Huck
http://trionfi.com