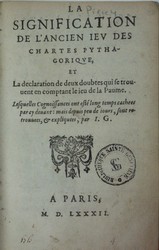 mikeh wrote: 27 Apr 2018, 03:19 Here is my attempt to translate what Alain has added to his essay in French at http://letarot.it/page.aspx?id=603. I am sorry for not noticing his request earlier. Added later: I include the French that he quotes in this addition. I learn via Alain that it comes from Mathématiques au Moyen-âge, Eclairs sur le Moyen-âge, section I: "Dans le moule romain : du VIème au IXème siècle" [Mathematics of the Middle Ages; Lightning-Flashes on the Middle Ages," section I: In the Roman Mold, from the 6th to the 9th century"], by Henry Plane, 1988, p. 7, at https://www.apmep.fr/Mathematiques-au-Moyen-age-par

Epilogue? I wish to draw attention to the following facts:

- this Pythagorean structure was known to BOETHIUS, and consequently to those literate in Latin - and this, before the exile into Italy of Byzantine scholars
Boethius, De institutione arithmetica
viewtopic.php?t=1102&p=20080#p20080

Boethius understands that in the case of pentagons - "de generatione pentagonorum" - the differences between two successive pentagonal numbers form what we call an arithmetical series of common difference three.
1, 4, 7, 10, 13, 16 ...

613 by mikeh
Very interesting, about d'Etaples and Boissière. As I recall from somewhere, D'Etaples has a connection to Italy via Lazzarelli, not mentioned by Wikipedia.

Glancing through Bossiiere, I cannot see how it could possibly relate to the tarot sequence, but perhaps you will find something.

614 by BOUGEAREL Alain
Hi Mikeh
Early in the morning here.
1. Boissiere
Neither do I : I gave his Arythmachia for two reasons :
- as an example of the rules of winning victory in the game still in use at these time
- and most of all because if the expression 'jeu pythagorique" used a little later by Gosselin "l ancien jeu de chartres pythagorique..."
2. D" Etaples connected to Lazarelli?
TRy do recall where you made this finding ...
Very interesting
http://www.sgdl-auteurs.org/alain-bouge ... Biographie

617 by mikeh
Where I read about the connection was in Hanegraaff's book about Lazzarelli, which seems to have some additional information. I currently have only snippets, e.g. :
https://books.google.com/books?id=hss-n ... q=Champier
and some more for d'Etaples.
The book itself is in a library not very far away, where I will be able to get copies of the pages at some point soon.

619 by mikeh
I can say more about the connection between Lazzarelli and Champier. According to Hanegraaff, the intermediary between the two was probably Giovan "Mercurio" Correggio, the self-styled "son of God" whom Lazzarelli first encountered in 1481 Rome. In 1482 Lazzarelli gave him his translations of Tractates XVI-XVIII of the Corpus Hermeticum, which had not been in Ficino's manuscript.

Then in 1501, a year after Lazzarelli's death, Correggio went to Lyon, where Louis XII was staying, for the purpose of getting him to instigate a crusade against the infidels. While there, according to a letter from an Italian manuscript-hunter named Pierro Aleandro to the diarist Marin Sanudo (with whose works it is preserved), Correggio gave a work written by himself to the king, and a "similar work" to "the ambassador", from whom Aleandro says he "got it later". I am not sure who "the ambassador" is. Hanegraaff says Sanudo was "the Venetian ambassador", but if the letter was to him, why would Aleandro be telling him about it? Maria Paola Saci, cited in footnote 131, says it was given to "the orator", again unspecified.)

Saci (Ludovico Lazzerelli, 1999) examined the codex of Lazzarelli's translation, and says there are annotations in Aleandro's handwriting. So probably Aleandro brought it back to Venice with him, and then to Rome, "from where," Hanegraaff writes, "Egidio di Viterbo could have taken it to Viterbo."

In addition, while Correggio was with Louis XII in Lyon in 1501, the king had his claims to vast medical knowledge put to the test by two physicians (he was proved to have "superhuman knowledge," according to Trithemius, who heard this from a couple of acquaintances with occultist leanings). Aleandro's letter says only that one of these physicians was a Spaniard and the other a Frenchman. Carlo Vecce in Iacopo Sannazaro, 1988, pp. 18-19, identifies them as Gonsalvo di Toledo and his friend and colleague Symphorien Champier, who of course is the one who published Lazzarelli's translations in 1507.

Aleandro's letter therefore confirms what has already been assumed by scholars for some time: Correggio's visit to Louis XII in 1501 was a crucial event in view of the diffusion of the Hermetica in Latin translations from Italy to France.

The relevant documentation is in Hanegraaff's introductory essay to Lodovico Lazzarelli (1447-1500), pp. 40-41.
https://4.bp.blogspot.com/-baWWO1kGrpg/ ... 0-41-1.jpg
He does not say how d'Estaples got a copy of Lazzarelli's Crater Hermetis so as to print his expurgated version. He, like Champier, was in Lyon in 1501. He also traveled to Italy occasionally. But at the time of his 1483 visit to Florence, the Crater Hermetis wasn't yet written (not until c. 1490). And I know of no record of communication between Lazzarelli and Ficino, or of Lazzarelli's visiting Florence.

Correggio did go to Florence, in 1486, in rather uncongenial circumstances. Il Magnifico had him arrested and turned over to the Franciscan Inquisition, which sneeringly subjected him to public examination in shackles. That the self-declared Pimander, spiritual son of Hermes Trismegistus, could be so treated by Lorenzo somewhat shocks Hanegraaff. I'd think it was other language that caused him problems, his claiming to be "son of God".

620 by BOUGEAREL Alain
Good job Mikeh.
About D'Etaples and Ficino in Italy of Encyclopedia Universalis, I suppose the informations came from the indications given by Champier


Notes de lecture :
Champier 1471 1539 i Doctor in medecine of Lyon is a disciple and a commentator somewhere in concurrence of D Etaples and Ficino..
Ficino havig written De triplici vita, Champier writes De quadruplici vita
D Etaples publishes 1505 what could be thought as the Corpus Hermeticum, Champier publishes 1507 the Definitiones
Asclepiii that D taples did not know about and in 1508 a THeologia Trismegista
His essential interest for us is the publication in 1507 of the Definotiones Asclepii discovered and translated by Lazarelli
How did he discover this text? Lazarelli was dead in 1500.
As you noted, K Ohly believes that the master ofLazarelli, Jean Mercure de Corregio came to France to do so.
The book dedicated to D'Etaples by Champier also gives indications of D'Etaples journey's in Italy