11 by mikeh
I recently noticed a few maps of medieval trade routes. First, here is one of the Silk Road, which is how playing cards probably arrived in Europe from points east (from http://www.orexca.com/silkroad.php). 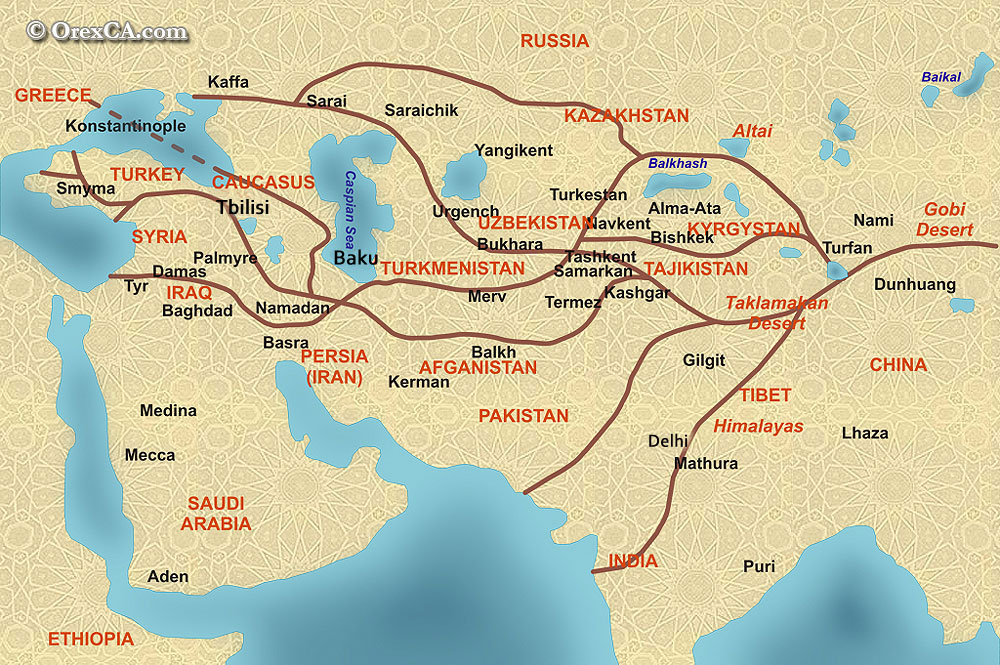 Note in particular the routes that go to or through the Black Sea. The northern ones go through the areas from which the Mamluks of Egypt were recruited: Georgia, Circacia (just above Georgia), the Eurasian steppe, etc (see https://en.wikipedia.org/wiki/Mamluk and the links there). The Mamluks might well have been the ones to bring playing cards to the Mediterranean.

At the same time, these routes are those used for trade to north-central Europe. Here is another map (from http://www.slideshare.net/henrjt/creati ... ddle-ages2): 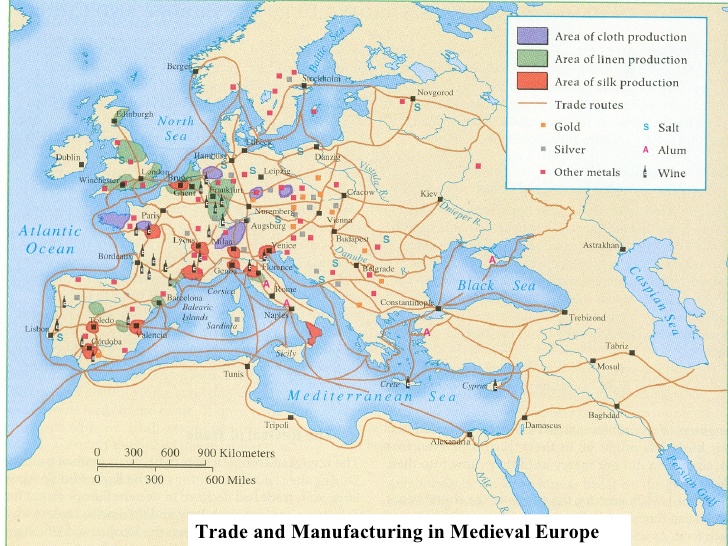 You can see that the route that passes through the Caucasus and across the Black Sea continues on to Vienna, Prague, etc. There were also other routes not shown, as you can see by searching in Google Images for "medieval Europe trade routes". These maps merely show in picture form the obvious: that trade from the East took many routes, including northern ones. And besides these, there were the armies of the Golden Horde and other invaders.

Especially during the Black Death, trade with the Mediterranean would likely have been much diminished (due to loss of people and increased danger of infection) and so safer and almost as lucrative ones further north probably would have been preferred. Also, although I am not sure how the plague spread, I would think that overland trade would have carried it less well than ships--fewer rats, fewer germ-carrying bodies arriving in population centers.

12 by Huck
Already Ottokar II, king of Bohemia, had splendid trade connections in all directions, also to the East.
https://en.wikipedia.org/wiki/Ottokar_II_of_Bohemia
He competed with Rudolf of Habsburg for the Empire after the interregnum 1272. Rudolf was chosen, cause he was the weaker alternative, the Kurfürsten (electors of the emperor) didn't like a strong emperor. A war between Ottokar and Rudolf resulted, Ottokar died at the battlefield (1278).

If the Mongols adapted playing cards in China, then there were many opportunities, how playing cards might have reached Europe. Naturally it's a longer way to reach a functioning production in Europe, getting some players to be interested and finally to realize a larger distribution, which by gambling use caused prohibitions. There might have been some smaller islands of playing cards use, which stranded or stayed hidden, long before 1367, the accepted date for Bern. Bern was visited by Charles IV in 1365, then on his way to Arles.

The Trionfi card development at the Ferrarese court involved noble children and teenagers. Studying recently the conditions of the Austrian court, then we have an explosion of Northern Tarock use around 1750-55. Maria Theresia had totally 16 children, from which the oldest around 1755 had an age of 10-17.

Charles was married four times. His first wife was Blanche of Valois, (1316–48), daughter of Charles, Count of Valois, and a half-sister of Philip VI of France. They had three children:

His third wife was Anna von Schweidnitz, (1339–62), daughter of Henry II, Duke of Świdnica and Katharina of Anjou (daughter of Charles I Robert, King of Hungary), by whom he had three children:
Elisabeth of Bohemia (19 April 1358 – 4 September 1373); married Albert III of Austria.
Wenceslaus (1361–1419); later elected King of Germany (formally King of the Romans) and, on his father's death, became King of Bohemia (as Wenceslaus IV) and Emperor-elect of the Holy Roman Empire; married firstly to Joanna of Bavaria in 1370 and secondly to Sophia of Bavaria in 1389.
son (born and died 11 July 1362).

The deciding factor is naturally Wenzel (oldest son), who had the major interest in this family. 1376 he was crowned as second king in Aachen as a 15-years-old boy, a large cavalcade of Bohemians accompanied the event. 1377 we have John of Rheinfelden observing a playing card revolution.

1441 we have Bianca Maria Visconti (15 years old) in Ferrara, likely accompanied mainly by two Ferrarese girls of the same age, Beatrice and Isotta.

The older children of Maria Theresia:

The deciding signal for the Austrian court and its playing card use are the production of playing card books:

Lorenzo de Medici likely should be also noted in this context. The younger Louis XIV (5 years old and already king of France) caused the development of a long running tradition of teaching games on cards.

If one believes the researcher Hübsch, then playing cards were already a longer time in Prague. But there was no direct promotion from the side of Charles IV. This might have been different in 1376.
Huck
http://trionfi.com

The article offers a lot of interesting aspects.
Huck
http://trionfi.com

14 by Huck
Notes to Hübsch ...
I found them in my older material, but I don't remember, if I've mentioned them online ...

It tells, that Hübsch had the redaction of an Encyclopedia for economy. I found a strange other note in text about "doppelte Buchführung" (Double-entry bookkeeping), in which a F.L. Hübsch was involved in an example (perhaps in c. 1860). Maybe the author addressed Hübsch in a specific intention, I don't know.

The author discusses the invention of the "doppelte Buchführung", and he seems to defend, that his personal father invented it.
Huck
http://trionfi.com

The article contains a lot of information to the relations between German knight orders and the Kings of Bohemia.
Already in the year 1217 the knight order had possessions in the region of Prague.
Huck
http://trionfi.com

16 by Huck
The life dates of FL Hübsch were unknown till now.

According this statement Hübsch died at 23rd of May 1858 in Prague. 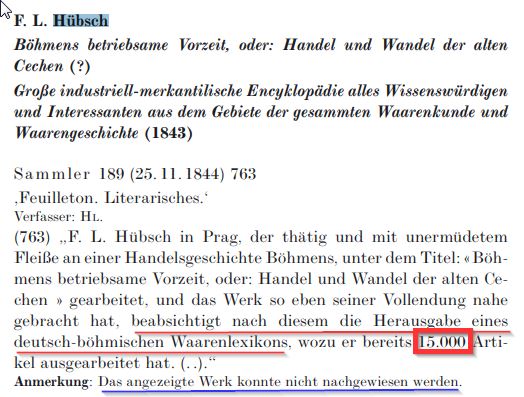 My comment:
It seems, that in 1844 Hübsch was near to finish a work with the name "Böhmens betriebliche Vorzeit, oder: Handel und Wandel der alten Cechen." Probably this work was renamed and became the work about böhmischen Handel, which Hübsch indeed published in 1849 (with the playing card notes). After this Hübsch had the plan to publish a dictionary about German-Bohemian Waaren (trading items), for which he had already prepared c.15000 articles.
I remember, that I saw variously newspaper announces for parts of this work, maybe in the years c. 1441-1443. From this I assume, that the article collections were sold in parts as "Hefte" (magazine-style), not in a "Buch" (book). But possibly there was a plan to join the Hefte-content in a book later.

17 by Huck
Altstädter Rathaus in Prag ... before destruction at the end of WWII

Foundation of the Old Town Hall
In 1338 the councillors of the Old Town bought a large patrician house from the Volflin family and adapted it for their purposes. Over the following centuries the original Town Hall building largely disappeared as a result of renovations and expansion of the building; one external remnant of the original structure still visible today is the Gothic stone portal with mouldings on the western side of the building.
The burghers of the Old Town extended the original Town Hall towards the west by buying the adjoining house, and construction began of a stone tower on a square plan. The tower, which was the highest in the city in the Middle Ages, was completed in 1364, and has been largely unchanged since then.
The Town Hall is architecturally unusual, because it is constructed from many different smaller houses. The expansion continued in 1458 when Mikeš house was added to the west side. The Council Chamber in the east wing was vaulted with a net vault, supported by two pillars, at the end of the 15th century.

automatic translation:
At 4 p.m. - just as the surrender of the German troops in Prague was signed on Bartolomějská Street and the armistice was about to come into force - German tanks destroyed the east wing of the city hall with the last shots of the Second World War in the city. At 5 p.m. Czech and German so-called parliamentarians came to the Old Town Square and ended the battle. So the battle for the Old Town Hall only ended an hour after the official armistice. "
The devastating fire in the old town hall could not be brought under control until the next day. As a result, there is still a gap in development on the west side of the Old Town Square, which is reminiscent of the events of May 1945

It's not clear, where Hübsch had found his material.
Huck
http://trionfi.com