The Genealogy of Jesus the Messiah

In 1481, Pope Sixtus IV summoned Botticelli and other prominent Florentine and Umbrian artists to fresco the walls of the Sistine Chapel. The iconological program was the supremacy of the Papacy. Sandro's contribution was moderately successful. He returned to Florence, and "being of a sophisticed turn of mind, he there wrote a commentary on a portion of Dante and illustrated the Inferno which he printed, spending much time over it, and this abstention from work led to serious disorders in his living." Thus Vasari characterized the first printed Dante (1481) with Botticelli's decorations; he could not imagine that the new art of printing might occupy an artist.

The painting of the walls took place over an astonishingly short period of time, barely eleven months, from July, 1481 to May, 1482. The painters were each required first to execute a sample fresco; these were to be officially examined and evaluated in January, 1482. However, it was so evident at such an early stage that the frescoes would be satisfactory that by October 1481, the artists were given the commission to execute the remaining ten stories 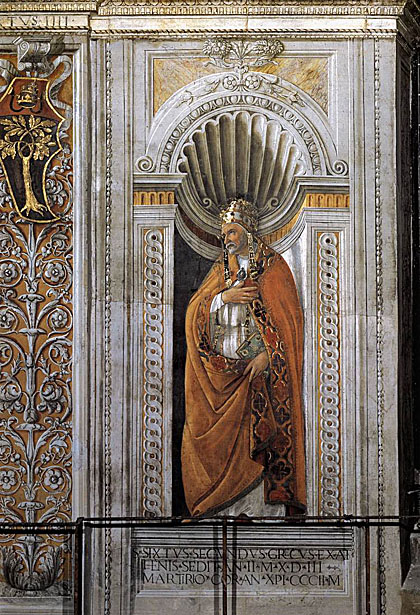 Earlier I made some observations and studies about "28 famous men" in the Studiolo of Montefeltro ...

... somehow in the context of a Montefeltro collection

The 28th famous man (that is I think the only "living famous man") is the same Pope Sixtus IV, who commissioned the work on the Sixtine Chapel.

Montefeltro had gotten commissions and honors by Sixtus IV since 1474. In 1475 Monefeltro honored Sixtus back with the iclusion of the piture between the 28 men. In 1478 Montefeltro was involved in the assassination attempt on Lorenzo di Medici. which was arranged by the Rovere. Still in August 1481 Montefeltro helped to take Forli for the interests of Girolamo Rovere (so in the time, when the 28 popes of the Sixtine chapels were ordered and quickly realized. However, in April/Mai 1482 Montefeltro took the commission of the alliance Firenze, Milano, Napoli and Ferrara against Venice, which tried to attack Ferrara ... whereby Venice acted in cooperation with Pope Sixtus, who hoped to gain Ferrara for his own family. So Montefeltro changed the political sides then, rather dramatically. Probably he had enough of the Rovere and their endless desires and somehow remembered old friends ... He died in the defense of Ferrara in September 1482 with the war still going on, a few days after (or at the same day) his son-in-law Roberto Malatesta had died as leading condottieri of the other political party.

About the death of Roberto Malatesta translated from Condottieridiventura: "([after the successful battle of Campoforte at 21st of August] ... he returned to Rome, where he was housed in the palace of the Cardinal of Milan Stefano Nardini, or del Governo Vecchio. The city had greeted him with triumph by Pope Sixtus IV. He died of fever, or as it is said, of poison given to him by the envy of the Riario ...") ... I hope I got this right.

Well, this suspicion I never read before, but it would be logical considering the conditions. Rome was murderous in the latter days of pope Sixtus, and the Riario had the interest to clean the world of rulers in potential church territory. Later after 1500/1527 Rimini was ruled by the Chiesa.

Users browsing this forum: No registered users and 31 guests