Ross G. R. Caldwell wrote:Don't forget the Chariot discovered in the late 80s and now in the Musée Français de la Carte à Jouer in Issy-les-Moulineaux (referred to as the "Issy Chariot") -
http://www.issy.com/musee/ct3.htm

Thierry Depaulis identified this card as belonging with the Warsaw museum cards (Kaplan I, 109), and dates to about 1450, Ferrara.

It is much less overtly "mythological", unless the two different colored horses represent that they have different "natures".

There is a canopy over her head. It's tempting to consider it a "marriage" chariot, with all the symbolism that implies (after love, comes marriage, hence chastity/modesty, good qualities in a wife). For what it's worth, Bianca Maria was married in red, "her zodiacal color" (as noted by Pizzagalli - BM was an Aries. Leonello is also noted as considering the color of the planet for the day of the week in choosing his clothing, so symbolism like this might really be present). I don't know if this is Bianca Maria, but the clothing is outstandingly red.

She's holding an orb and a sword, in order to say "Be nice to me or I'll cut your balls off."

It's hard to interpret the gestures of the four girls around the main figure on the chariot.

#22 by mikeh
In support of Ross's interpretation of the BAR charioteer's helmet as being a war helmet and not Mercury's, here is a "Triumph of Mars" very close to the BAR's imagery, from G. Mariani Canova's article "The Italian Renaissance Miniature," on p. 21 of The Painted Page, ed. by Alexander. In a paragraph devoted to Florentine miniatures of the 1440's and 1450's, Canova says of it:

A highly skilled painter of the same period [she has just been discussing a 1458 Pliny], Francesco Pesellino, added superb full-page miniatures, such as that of Mars in a chariot (fig. 11), to a De bello punico by Silius Italicus, which is also decorated with a bianchi girari border.

By "bianchi girari," she has previously explained, she means "the white vine-stem motif typical of Tuscan manuscripts of the 11th and 12th centuries." Her footnote, p. 33, says that the manuscript is "Venice, Biblioteca Marciana, Lat. XII, 68 (=4519)." In the sentence following the one quoted above, she talks about "illuminations of copies of Petrarch's Trionfi by Francesco d'Antonio del Chierico of 1456 and by Apollonio di Giovanni." 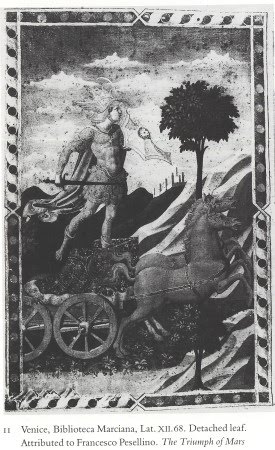 #23 by mmfilesi
Eearler references to Carroccio, the ancestor of the Chariot Triumph

[9] Anonimo Rom., Cronica, XIV, cap. 5, pag. 22.11:Vinti milia perzone pericolaro nella rotta. Lo carroccio tame a Bologna tornao.
When a man has a theory // Can’t keep his mind on nothing else (By Ross)


http://www.italica.rai.it/index.php?cat ... o_ii_prima
When a man has a theory // Can’t keep his mind on nothing else (By Ross)

That is, the carroccio of Firence. Its red and have two red poles, and its pulled by two oxen red... Where we have seen a red chariot?

That is, the carroccio of Firence. Its red and have two red poles, and its pulled by two oxen red... Where we have seen a red chariot?

Interesting observation, though it are horses, not oxen ... where do you see the "oxen" in the text? My poor Italian ... the "antenne" ?
1348 is a little early ... but, well, it might had become a tradition to get a red chariot as sign of the city, expressing great wealth, cause red was an expensive color.
Huck
http://trionfi.com


Interesting observation, though it are horses, not oxen

Sure. In a real chariot as heavy as the carroccio, oxen are needed to throw. But, in pictor-chario we can put a horse, or Pegasus, or swans, which are more elegant.

They are Standards (flags)

Its the same? What do you think?

#29 by Huck
The Medici changed their heraldic in May 1465 from 7 palle to 6 palle, one palle then including the French Lille.

Earlier there were other changes of the number ... they were reduced with the time.

The action was caused by French king Louis XI and his problems with Burgundy and not satisfied nobility, which lead to a war and the Battle of Montlhéry in the same year at 16th of July. The financial help of the Medici - which naturally accompanied the change in the heraldic - caused that a lot of Florentians found a new home in Lyon (new capital of France) and on long sight it caused two Medici princesses becoming Queens of France in 16th century.
Sforza was also engaged, who sent Galeazzo Maria with some military.

Nonetheless Louis needed some luck to survive the crisis.

According the Trionfi.com theories the Charles VI. deck was made ca. 1463, likely for Lorenzo's 14th birthday, 1.1.1463, still in the 7-palle time. When the France-Medici agreement was made in early May 1465, Lorenzo di Medici likely already had started a journey through various Italian cities, which should lead him finally to Milan, where the bride entourage to Naples for Ippolita Sforza gathered with some connected festivities, diplomatic talkings etc.. Lorenzo had to accompany the entourage till Florence, where the entourage intended to participate in the Giovanni festivities (24th of June).
The news about the 6-palle-change (and the connected political messages) reached Lorenzo likely during the journey.
According the Trionfi.com theories Lorenzo got the idea to present the 6 palle in 6 cards, which he intended to present to the Sforza (the six added cards in the Pierpont-Morgan-Bergamo Tarocchi). Possibly he used his stay in Ferrara for this activity (the stay took longer as expected, and Lorenzo's father, Pietro di Medici, wrote a demanding letter).

Well, somehow the 6 cards arrived in Milan ... with Sun + Moon + 2 cardinal virtues, which were in the Charles VI. but not in the 14 Bembo cards. And with a Star, which probably already had arrived in the Medici deck as a new card, when the Medici Chapel (with 3 holy kings, which presented sun-moon-star) was opened ca. 1464/65 and was celebrated with a triumphal march (a 6th of January 1465 seems logical).
And with a card with 2 putti carrying the picture of a city - identified as "World", but probably somehow indicating a French Lille in the new Medici shield.

But thanks for this picture:

For something like this I was looking for. And a picture from the Medici chapel (painted 1459-64 by Gozzoli) very precisely meets the spot.


Regulations for the Joust in Fifteenth-Century Europe: Francesco Sforza Visconti (1465) and John Tiptoft (1466)

Abstract
This article examines the role of the Sforzas and Viscontis in Milan who set up 'Regulations for the Joust' to be staged at a wedding in 1465. For the first time the text of the only copy preserved in the State Archives of Milan is translated into English. The travels of John Tiptoft in Italy are traced from 1458 to 1461 followed by the text of his 'Ordinances' of 1466 (Ashmoleian Ms no 763 version). Both regulations are compared in detail focusing on the quantification of performance, targets, and actions. Despite striking similarities it can only be stated that the Italians preceded the English by one year.

with a connected Google snippet "Rules for the jousts which were staged in Milan in May 1465 on the occasion of .... delegation of eminent Italian scholars, such as Roberto Sanseverino from ...", which indicates, that the meeting 1465 had some importance for knight tournament rules.

This is an interesting detail, which I didn't know of. And it looks promising ...
Huck
http://trionfi.com

Yes, yes... Sorry, friend. I know the trionfi theory of 7 palle (and I tkink its correct), I only ask about this simbol:

The original of cappella:

http://commons.wikimedia.org/wiki/File: ... semper.jpg
When a man has a theory // Can’t keep his mind on nothing else (By Ross)

Users browsing this forum: No registered users and 1 guest