This is here ...
https://archive.org/details/diccionaridelall01labeuoft
... there are various versions, and the research was negative."
Huck
http://www.sgdl-auteurs.org/alain-bouge ... Biographie

#22 by BOUGEAREL Alain
Well, maybe these datas could be helpful ...maybe completely uninteresting.

NB Nor Ross nor I did follow later on this methodology of studying together in a commun article entries or problematics with two advocates defending a different point of view.
It was a "première" and a "dernière" ...
Yet, I, for my part, still use the forum or specific threads that I call "at work' to do so for example.
It is very valuable to have contradictors or contributors.

"A tout Seigneur , Tout Honneur" ...
Quotes of Caldwell :
D'Allemagne's suggestion is ingenious, as trying to explain a plausible relation between "paginas" and "naips". But "knaep" as the bridge between them seems to have been ignored by later commentators, without destroying the fact that "paginas" in the 1337 context could very well be cards. Why is it ignored?

"naip" has, or originally had, two syllables.

Thus the pronunciation of "nayps" is na-ips (long i, "ee" in English).

D'Allemagne may not have known that entry, or the spelling "nahips", so for him the one-syllable (at least I think it's one syllable - Ross) "knaep" meaning "paper" was connected to "naip" meaning "deck of cards", and produced a workable etymology, which is not difficult to believe since there was a known trade link between Flanders and Spain.

I don't understand, what you're up to.

I see. The point was that "page" in French = an old meaning of "carte", like "carta" still, in Italian.

However it wasn't that sense of "page", but the other, a young noble, that "knaep" corresponded to. Thanks. I haven't read Alain's post yet.
mikeh
mikeh

#24 by mikeh
responding to Alain's post:
from Ross's information, it would seem that "naipe" had two syllables, whereas "knaep" had only one. I assume that the Arabic had two syllables, too. Another reason for rejecting d'Allemagne's idea.
mikeh
mikeh

#25 by mikeh
I am simply going through Hargrave's book to see if anything of interest has been missed by recent researchers. I am not sure where to put this post. It probably belongs in the general "origin of playing cards into Europe' thread, but I will put it here since it is active.

Going back to the fourteenth century is a manuscript "Le Roman de Renard le Contrefait," which seems to have been written between 1328 and 1341, in which the following line occurs:

Again in the 'Chronicle de Petit Jean de Saintre,' who was a page at the court of Charles V, the governor of the pages rebukes them for playing at cards; and in a poem by one Guillaume de Guilleville, written in 1350, the line 'Jeux de tables et de cartes' is found; while the earliest known print of persons playing at cards is a miniature in 'Le Roman du Roi Meliadus de Leonnoys," by Helie de Borron, which was probably written some time in the latter half of the fourteenth century. A king and three attendants play, while three others look on, and the cards themselves bear the old suit marks of batons and coins. So that the antiquity of French playing cards is well established.

If "cartes" is a later interpolation, whatever was there originally has to have the right number of beats in the line. ,

That would seem to end that. But it is a very weak line, bad rhythm and very unimaginative, as "jeux" is just a variation on "jouent". The other is certainly livelier. Has anyone confirmed Merlin?

Wikipedia, both French and English, give "Petit Jean de Saintre" as a novel written c. 1456. Even Lacroix caught that, saying the author wasn't born until 1398.

In Wikimedia Commons, the "print" of "latter half of the fourteenth century" shows up as "Originally published/produced in Italy [Naples]; circa 1352."
https://commons.wikimedia.org/wiki/File ... _12228.jpg 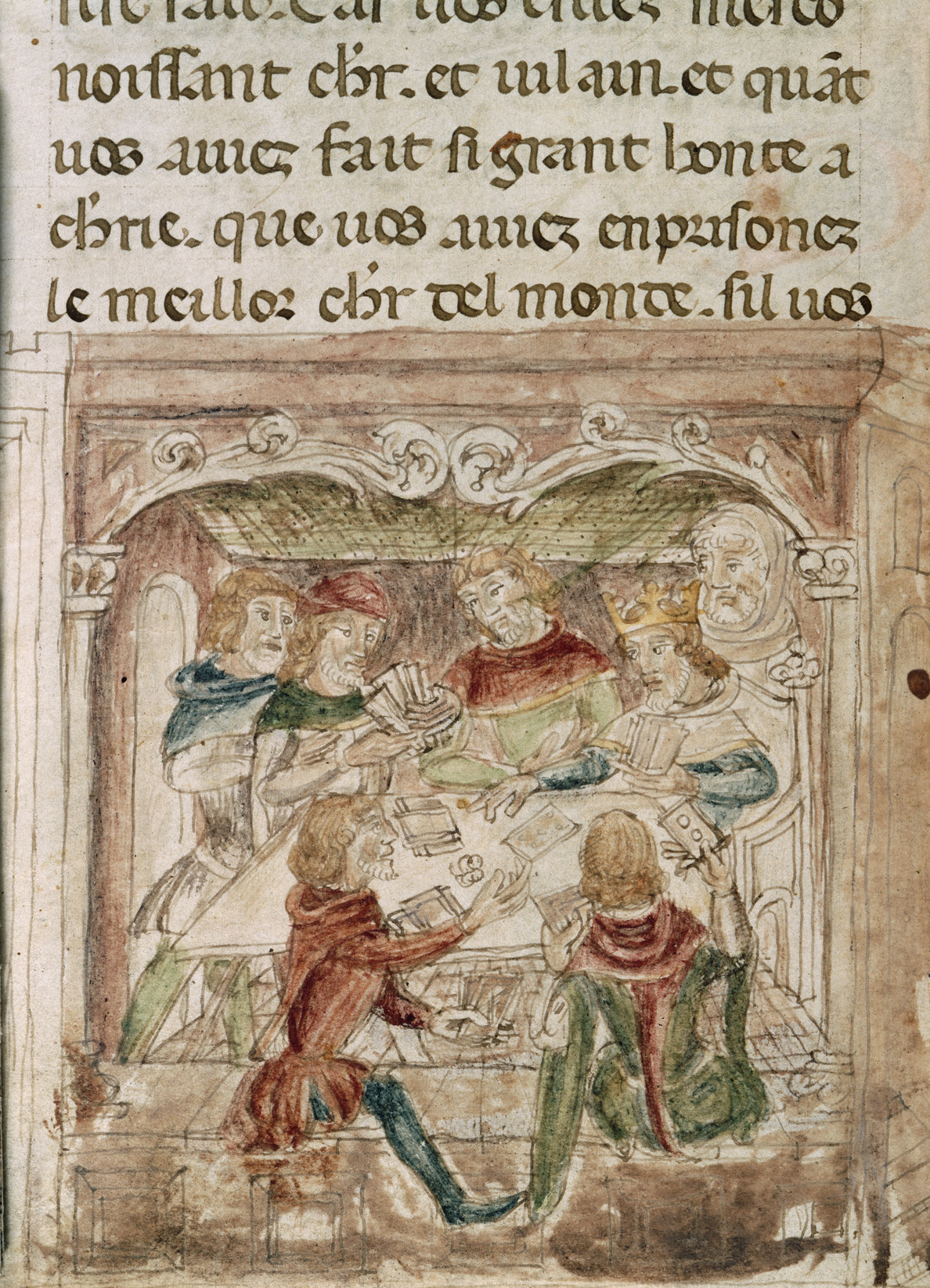 The artwork looks a century later to me (if only the use of single point perspective), but I am no expert. The source is the British Library, I would have guessed a very old source, just like the British Museum entries. We know from Moakley how seldom libraries update their information. However I see that the bibliography at least, in the catalog entry, goes to 2012: http://www.bl.uk/catalogues/illuminated ... tart=12228. They date the manuscript to c. 1352 because the arms of the king of Naples at that time are in several of the miniatures. They show the entire page the miniature is taken from (at the bottom of the web page, last one); it certainly doesn't look like it was added later than the rest. Also, the table in the first miniature, of the king playing chess, while cruder (no perspective at all for the chess board) has the same type of perspective, the modern kind. So I am puzzled. But I suppose they could have waited 40 or 50 years or more before doing the miniatures. It was standard to do the text first and leave space for the miniatures. The king didn't reign very long, so the job didn't get done, is my guess. Also, it would seem that there is no reference to cards in the text, or we would have known about it.

Lacroix's monograph is of interest in itself; he debunks de Gebelin, also the idea that the "Charles VI" was done for Charles VI, and points out that "Petit Jean de Saintre" is a novel written by someone not born before 1398. He cites without comment the idea expressed in a 1472 book, Le Jeu d'Or, published in Augsburg, that playing cards were invented in Germany "vers 1300". (Merlin notes that the author gives no source.) I see there that the "Nicolao Pépin" theory existed even in 1835. As for tarot, Lacroix says that it was invented in Lombardy and that the word comes from "Taro" there, deriving it from the tare (defect) of the Fool, or "phtora", corruption, or else the division of the gold backgrounds into compartments by téréin=trouer (piercing). He also derives cards and tarot from chess, in his own way. These are in the first 8 pages.

A related issue is where woodblocks first appeared, which are necessary for cards because playing wears them out, unless you are rich. Lacroix says Germany. Hargrave ( p. 91) notes the similarity of woodblock printing to the printing of money in "Chambulu", described by Marco Polo:

..the principal officer of the great Cham smears with cinnabar the seal consigned to him and imprints it upon the money so that the figure of the seal, coloured in cinnabar, remains impressed upon it.'

A Kartenmacher (card-maker) is frequently on the same page with a Kartenmaler (card-painter) showing that tere was a distinction between the two branches of the art, though, like the barbers and surgeons of those days, both belonged to the same guild. The names of many women occur in the town books of Nurnberg as card-painters, between 1423 and 1477.

And on p. 91, "German authorities" say the first wood engravers were Kartenmachers, so that when the monks saw cards, they got the idea of having prints of saints from that.

#27 by mikeh
Thanks, Huck. Once again, I searched on Google but forgot to use THF's own search engine. or Aeclectic's.

If I have any more to say about Guillaume de Guilleville, I will say it on his own thread, viewtopic.php?f=11&t=1157.

mikeh wrote:Thanks, Huck. Once again, I searched on Google but forgot to use THF's own search engine. or Aeclectic's.

If I have any more to say about Guillaume de Guilleville, I will say it on his own thread, viewtopic.php?f=11&t=1157.

#29 by mikeh
On March 3, 2017, Franco Pratesi posted an Addendum to his note on playing cards in Holland, entitled "Carte da gioco in Europa prima del 1377 ? Olanda - Addendum" (http://www.naibi.net/A/602bis.pdf). Here is my translation, with my comments (my attempts to translate the Dutch, left untranslated by Franco) in brackets:

Cards in Europe before 1377? Holland
Addendum

This note does not correspond to a new study on the subject, but only to a further development of point 3 of the previous note. This is the date of 1365 introduced in the discussion on the oldest records for playing cards in Europe of an article by Lex Rijnen (1). In the previous note the issue was commented on, even with the help of a prolonged correspondence with the author who introduced the notice. In recent days that correspondence has been enriched with an important element; Lex Rijnen has announced to me (2) that the British journal had introduced an error, then corrected in the next issue of the same magazine, the official organ of the IPCS, better known later as The Playing-Card (3).


CORRECTIONS
Due to editorial misinterpretation, apologies are due to Lex Rijnen for a serious mistake appearing in his article on MAKERS OF PLAYING-CARDS IN THE NETHERLANDS in the issue of November 1975. The fourth line of the first paragraph should read “...north of Amsterdam, it is said that playing-cards are mentioned)...”.

Let us then re-read all the parentheses in question, after the correction as indicated in the magazine:

(in the accounts of Jan van Blois, dated c1365, who owned several manors north of Amsterdam, it is said that playing-cards are mentioned)

To me it is not clear where that "it is said" is intended. From the phrase as it is written I would understand that in the account books "it is said" that cards are cited, but I assume that the "it is said" must be understood better as the voice of the people, or as a common opinion among historians.

3
of the nineteenth century "it is said" that playing cards were mentioned in the Jan van Blois account books for years around 1365.

The date remains problematic, however, although indicated approximately. If you read that in Jan van Blois account books, playing cards are mentioned, there would be no surprise, knowing on the one hand the passion of Jan van Blois for the game and the other the early spread of playing cards at the ducal courts of Brabant, Luxembourg, The Hague; however, as previously found in the documents, they are always dates after 1377, albeit slightly.

In the same personal communication, Lex Rijnen adds some other references on the early days of playing cards in the Netherlands.

Besides SCHOTEL and WIJN, other 19th century writers mention playing-cards, but no exact dates.

[My guess: He (j.v.Blois) went dressed like a fool in the best fancy dress, played CARD and dice with his subordinates]

[My guess: Under ENTERTAIN: ..... except playing with the CARD, which then were named QUARTERS because of the four colors or positions, which were the nobility, clergy, merchants and peasants.......... Duke Albrecht of Bavaria and Mr. Jan v. Blois also simply to pump (?).]

My opinion is that here also nothing precise is given; no confirmation, that is, on any possible card games in the Netherlands diffused before 1377, no concrete indication from fourteenth-century documents in which the news could still be found recorded.

The only problem, already encountered in the previous note and with no immediate explanation, is the simultaneous citation of Albert of Bavaria and Jan van Blois. Alberto lived until 1404, but Jan van Blois died in 1381, having spent the last years withdrawn in Schoonhoven with his court. The few years of Jan van Blois’ life after 1377 could have been sufficient to hand down his reputation as a player of

3
cards; for several previous years, the participation of Albert of Bavaria together with Jan van Blois in pastimes and the most varied games is widely documented (but not of cards); however, in the years after 1377, the friendship of the two men had broken and they would not have sat at a table to play cards together.

In short, if the information was true that the two friends played cards together, this would be an indication of a practice definitely anterior to 1377; but the suspicion remains that over time the popular reputation of their passion for the most varied games is extended to include also the cards that were not present in the games they did together. 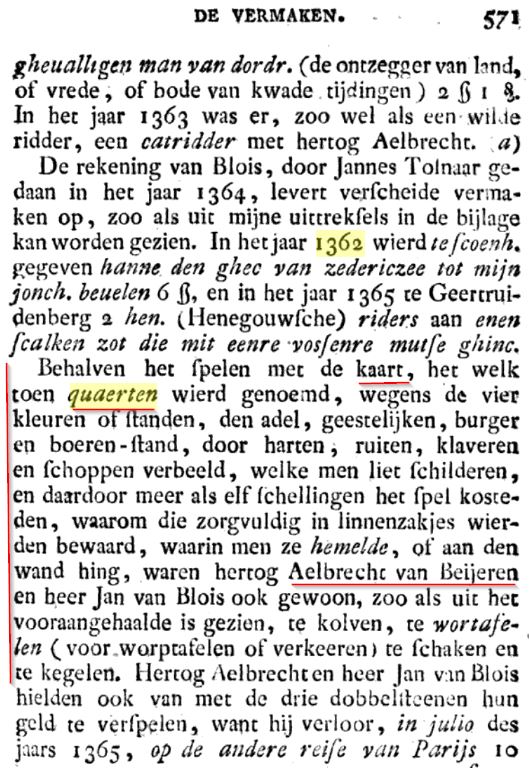 Users browsing this forum: No registered users and 23 guests