I am pleased to announce the publication of

Explaining the Tarot: Two Italian Renaissance Essays on the Meaning of the Tarot Pack 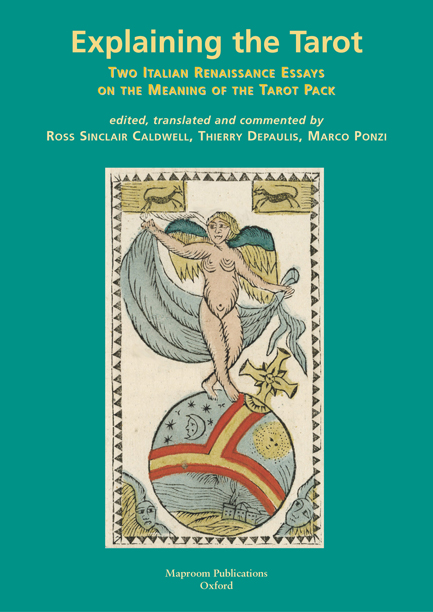 The symbolism of Tarot cards has intrigued people for five centuries. In this volume, two Italian authors of the 16th century, one known, the other anonymous, interpret the meaning of the Tarot trumps and the suit cards from a variety of interesting perspectives. Drawing from philosophy, religion, poetry, contemporary science, and the rules of the game itself, while at the same time offering examples from history and current events, the authors describe a series of images that for them is more than a game. They find that the symbolism of the cards, and their order, offer moral lessons and a wholesome guide to the ultimate purpose of life, which is to seek God. Their two discourses on the symbolism of the Tarot cards, here edited and translated into English for the first time, are the earliest ever written, and offer a rare glimpse into the other side of the game of Tarot in its first centuries – the meanings people saw in the pictures on the cards.

Marco Ponzi and I are of course active on this forum, and Thierry Depaulis is a name that is familiar to anyone interested in Tarot history.

I assume it will be a best-seller, so hurry while supplies last! ;)

#2 by EnriqueEnriquez
I just ordered mine.

This is very exciting!

Congratulations to Ross and Marco (and Thierry)!

#3 by robert
Congratulations Marco and Ross, this is a great addition to the current studies on Tarot History.

I can't wait to read it!
The Tarot will lose all its vitality for one who allows himself to be side-tracked by its pedantry. - Aleister Crowley

#4 by Ross G. R. Caldwell
Thanks Enrique and Robert!

Marco made a PDF to go with the book - a side-by-side comparison chart of Piscina and Anonymous - but we couldn't include it because it was too large for one page, and it was in colour.

It's very helpful and concise, so if you like I'll email it to you.

#5 by marco
Hello Enrique and Robert,
thank you for your appreciation of our efforts!

So, you are partially responsible for the existence of this book

Delivery estimate: We'll notify you via e-mail when we have an estimated delivery date for this item. It will ship separately. You can cancel at any time.
1 "Explaining the Tarot: Two Italian Renaissance Essays on the Meaning of the Tarot Pack"
Paperback; £7.28

Well, I hope some day of signature by the authors

Grande Marco!
When a man has a theory // Can’t keep his mind on nothing else (By Ross)

#7 by Pen
Congratulations Ross and Marco - can't wait for mine to arrive!

Pen
He's not the Messiah, he's a very naughty boy...

Delivery estimate: We'll notify you via e-mail when we have an estimated delivery date for this item. It will ship separately. You can cancel at any time.
1 "Explaining the Tarot: Two Italian Renaissance Essays on the Meaning of the Tarot Pack"
Paperback; £7.28

Well, I hope some day of signature by the authors

I advise buying directly from Maproom Publications http://www.maproom.co.uk/publications/ for the moment, since the second parties like Amazon have not updated their information for a few months.

So far there are no signed copies, since there are three authors and none live very close to one another, nor near the printer or publisher.

Depending on how many signatures you want, the price will obviously vary, to include all the shipping to and fro between the authors. Maproom Publications has a flat rate of £7 for a plain, unsigned copy; if you want a copy from a single author, signed, it will depend on who you want it from and the price of mailing from there to the destination. My provisional price is €12 plus shipping. In France that would be about €1,50, so €13,50. Internationally, I'm not sure.

But I am happy to sign and dedicate books (when I receive my author copies, which I haven't yet), as I am sure my co-authors are as well.

... might be helpful for the book and also further experiments with Tarot history book printing, if some webmasters set a link.
Huck
http://trionfi.com

Return to “The Library (East Wing)”

Users browsing this forum: No registered users and 1 guest