Over 500 years of history in 78 cards
http://www.forum.tarothistory.com/

The Wheel of Fortune

by SteveM
Like her lion headed garters: similar to those of the harpist in the TdP Moon card?

by Lorredan
The Riems Missal is a Festal Missal. A missal is the directions of prayer/song/readings etc for Sacramental Mass throughout the year. A Festal Missal is a section of that year in this case it would seem to be the Sacred Festivals pertaining to Our Lord's coming in the Flesh. So I do not agree that the figures are Estates- Noble, Cleric etc.
There are different rites of Missals- Dominican, Franciscan, Roman etc. These were private missals. I see some sort of Joke about the rites here- it could well be Reynard the Fox- but it also could be Franciscan Wolf, Domincan Dog (Pun on the Latin words) and the Carmelites (Possibly) I think The guy with the sickle is the Feast of Holy Innocents- The Last feast of the Liturgical year Feast of Christ the King(top Figure)- then Corpus Christi -Feast of the Blessed Sacrament. Included in the rites would be a mass for the dead, Marriage rite, Last Rites or Extreme Unction etc.
I have always thought the Wheel a Liturgical wheel. In the Visconti I think it is a personal wheel of Francesco Sforza- his rise and fall to get Bianca.

by Lorredan
To back up my contention that the wheel in the Missal is liturgical wheel
Figure on Left is King Of Judea- The Roman Jew Herod. The feasts on the wheel are all movable feasts depending on the dating of Easter- the indistinct figure of Jesus in the Tomb at the bottom under the wheel.
At the Top The feast of Christ The King is 51 days after Easter (Domincan rite); To our right is Corpus Christi 60 days after Easter (Augustian/Ambrosian rite) Holy Innocents around 28 December first Feast movable of Liturgical year (Franciscan rite) Wonderful aid to memory! Ithink the Tarot images of the Liturgical Wheel have become blurred and concerned the days of absolute non Gambling.

Augustian/ Ambrosian rite depicted by Dog tailed Rabbit. Long story- to do with Augustian Nun Juliana of Liege who was a mystic (another anorexic??) Who ever asked if the Beastrary on the right side had a lamb at the Bottom- is most likely correct.

by robert
I'm sorry, are you suggesting that Jesus is being depicted as on the Wheel of Fortune?? On the bottom???

by Lorredan
The Wheel rides on the date of Easter- everything depended on that date- He is not on the bottom in a inferior sense- Easter is the foundation of the Liturgical year.Sometimes in secular images it is time on the Bottom or underneath- which is quite accurate.

by robert
I'm having a hard time imagining this, it breaks the conception that I have of the meaning of the Wheel of Fortune. The idea of Christ being placed anywhere upon Fortune's Wheel is directly counter to what I have always seen as a warning against trusting in Fortune instead of God. God is in charge, not Fortune. Had the image shown God turning his wheel (still tough), and Fortune turning her's with fools on it, I might have been able to go with this, but as it is, it just seems wrong to me.

I get the idea of a wheel of the year, and certainly an emphasis on a liturgical calendar, but Fortune really doesn't belong anywhere near that type of iconography. Isn't this mixing metaphors?

by Lorredan
My post was mainly about the image from the Riems Festal missal....
BUT...

When I spoke to the Italian villageTarrochi players and they told me that they called the Hanged Man - The Cheat, I realised that all the cards that appear to be a Christian sequence could all be applied to card players, I understood the why of the images. If you needed trumps to win the game in increasing ranks of points and you had a sequence that was understood already- it is logical that that would be used neh? So The Wheel of Fortune- looks like the Liturgical wheel or I reign, I reigned etc, and is perfect as a Trump as is Temperance/Death/ and any of the others.
It is like the final World card in the Tarot de Marseille- it looks like the final card in a Christian sequence- it also has a finality in a card game as well. So the sequence imitates the Christian viewpoint and is applied to a game. It works as either, because the sequence is understood. Everyone knows that Mayfair is the most expensive place to have property in real life- so Monopoly used that as the most expensive property on the board. The Angel of Judgement is understood, as is adding up your points to see if it is Judged you won the game.
The Wheel turns - just like Fortune wheel and the Liturgical year wheel- are you lucky or not? Have you won at Christian Life with all it's vicissitudes and have you won the game with all it's vicissitudes?
~Lorredan

This is an amazing image from fresco circa 1470:

And this wonderful image, as shown on Michael Hurst's weblog: 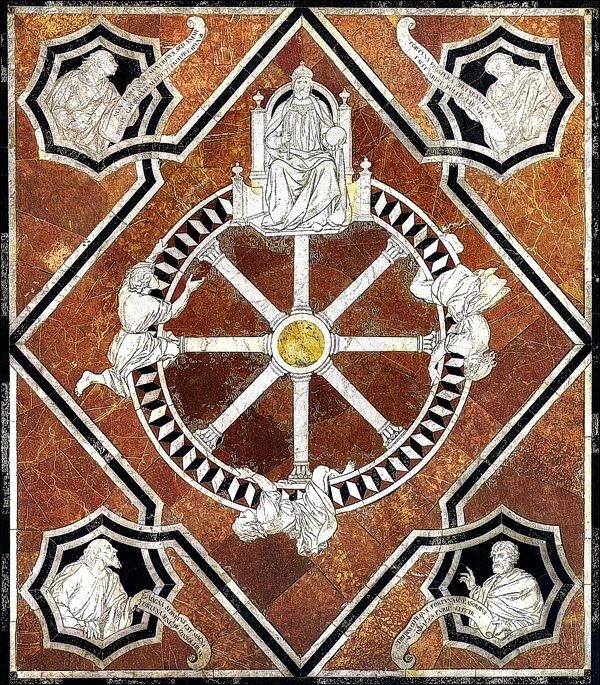 and some varitions... this a modern card based on an German image from 151a: 
Historically, I think a great question to ask is "Why does the Tarot de Marseille have only three figures on the Wheel instead of the much more standard four figures?"

There are exceptions, I remember Jean-Michel sharing some in the past. But, don't we also need to explain whey the fourth figure is missing? I'm very comfortable with with the four traditional "positions"... "I will reign, I reign, and I have reigned, and I have no reign." 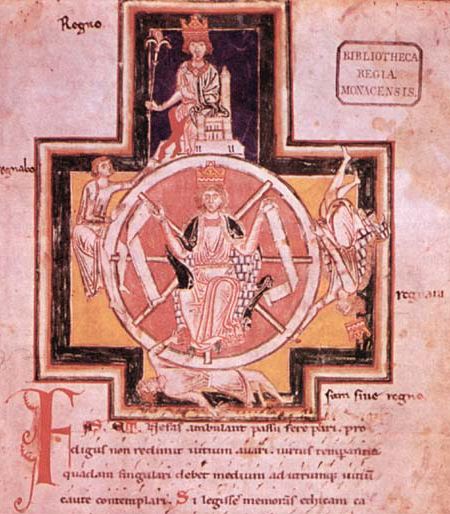 by SteveM
The seven ages of man:

(Thank you to the busy forum elves for changing the img to largeimg code for me.)
All times are UTC
Page 2 of 7
Powered by phpBB® Forum Software © phpBB Limited
https://www.phpbb.com/