Poesia appears in the Mantegna Tarocchi as highest of the 7 artes liberales (21-27), before the triad Philosophy-Astrology-Theology (28-30).

For the moment I've trouble to find any other iconographic "Poesia inside the 7 artes". That's strange.

Poesia appears in the work of Lazzarelli, together with its Mantegna Tarocchi neighbors, 26 Musica and 28 Philosophia.
There it seems, that Musica reigns the 10 spheres, Poetry the composition of Apoll + 9 Muses, and Philosophy the 4 remaining gods driving on chariots, Juno, Pluto, Neptun and Victory.
Together these are 27 figures, just the number, which Poesia has in the Mantegna Tarocchi, No. 27. That's curious.

In the time, when Lazzarelli had been in Rome, Rome was dominated by Pope Sixtus IV.
Sixtus got a burial place and a tomb, which was decorated by "artes liberales". I once found this description:


Antonio del Pollaiuolo's final commissions were the papal tombs of Sixtus IV and his successor Innocent VIII. The huge bronze tomb of Sixtus IV occupied the artist and his workshop nine years after the pope's death in 1484. The recumbent pope, wearing tiara and pontifical vestments, is surrounded by reliefs representing the seven Virtues (Charity, Hope, Prudence, Fortitude, Faith, Temperance, and Justice). Below these, on the sides of the tomb, separated by acanthus consoles, are the ten Liberal Arts (Philosophy, Theology, Rhetoric, Grammar, Arithmetic, Astrology, Dialectic, Geometry, Music, and Perspective).

The portrait of Sixtus seems to emphasize the pope's hawk-like features and sagging flesh. The complex folds of the pope's vestments and the drapery of the allegorical figures are the sculptural counterpart of the drapery in the paintings of the Pollaiuolo brothers.


Instead of promised 7 virtues I see only places for 6, from which I can 4 positive realize: Fides, Spes, Prudentia, Temperantia (the lower both I can't identify, I would assume, that Iustitia is missing or somehow expressed in the other fields; perhaps at the top ?).

5 of the Artes, whose number is raised to 10 (as in the Mantegna Tarocchi), but in which according above description Perspective replaces Poesia, I found in the web:

There are big differences to the Mantegna Tarocchi style, more or less new figures.

The exchange from Poesy to Perspective might have a background in the raising discussion in this time about the circumstance, that painters had traditionally less value than writers or poets ... this was especially expressed by Giovanni Santi, painter in Urbino, father of Raffael. Santi, an independent merchant, made himself poetry and paintings.

Sixtus had close relations to Urbino and Montefeltro (one of his nephews married to the Montefeltro family), perhaps this relates to the change.

Santi made Muses in Urbino.

It seems possible, that the impulse to have Muses in Urbino wandered with the Lazzarelli pictures. As in the case of the Sixtus-tomb figures, the figures are altered and refined considerably.
Possibly all in relation to the marriage agreement in late 1474 beteen Rovere-Riario family and Montefeltro.

Well,I don't want to stir up the earlier complications, for the moment I just see, that Sixtus' tomb ...
http://upload.wikimedia.org/wikipedia/e ... _Color.jpg
... had "9 artes", which appeared also in the Mantegna Tarocchi nos 21-30, but lost 27 Poetry and replaced it with the figure of Perspective.

I remember, that Sixtus IV. paid in 1471 for a large Thomas of Aquin picture, and I saw, that Thomas of Aquin is given some credit to have developed the new position of the artes liberales as a balance to the very dominant role of theology.

I found a general note, that Poetry appeared between the artes during "Renaissance" ... Renaissance is a longer period, and I would like to have this a little more precise. But I don't get it.

The German wikipedia article about artes liberales naturally has the quality, that it sees the problem of a German perspective. At least it's a little bit better and more informative than the English article. Both keep it relative short.

According the German article (and some related German wiki articles) ...
The 7 artes developed with the early universities, and were used to structure the organization. The 7 artes were "lower studies" and led to 3 higher studies ... and these were medicine, theology and "Jurisprudenz" (juristic study), from which each got the name "Fakultät"; the 7 artes were grouped then together to a 4th Fakultät, called philosophische Fakultät". This was first known in 14th century, but became standard later.

Medicine seems to have been one with "astrology" (at least at a specific time), so looking at the Mantegna Tarocchi with 7 artes and with the Trivium Grammatica, Loica and Rhetorica and the Quadrivium Geometria, Arithmetica, Musica and Poetry (replacing astronomy in the older model; as it seems, astronomy marched then to become one astrolgy and medicine), then we have with 28 philosophy the new "4th Fakultät", with 29 astrology somehow a new unity of astrology-astronomy-medicine and with 30 then Theology. The "Jurisprudenz" found then its place in the Mantegna Tarocchi No. 37 Justice as the highest of the cardinal virtues.

Well, that's a "German view", actually I don't know, if there were Italian differences, likely reality was much ore complicated than I can give it here. 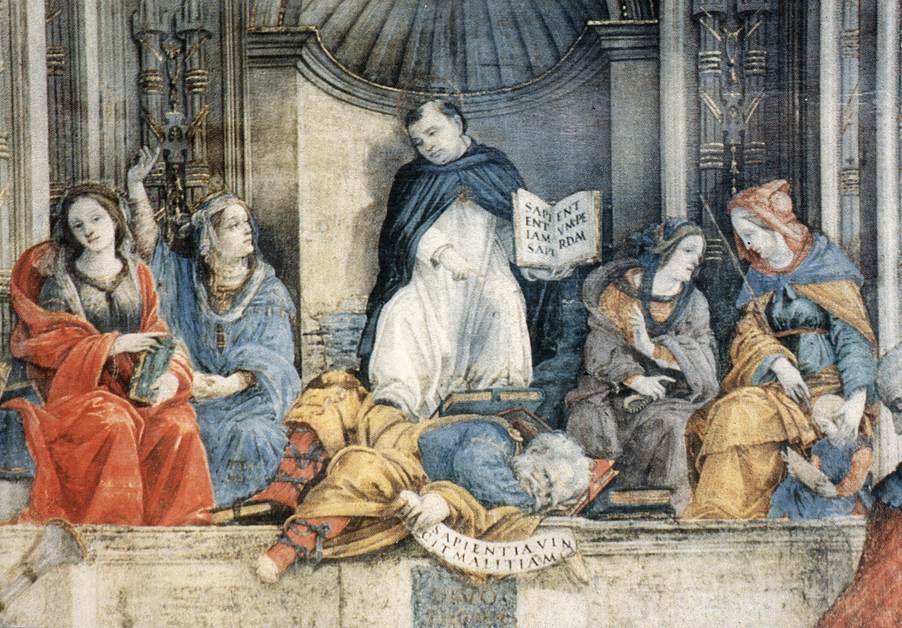 Further I found a note, that Petrarca and Boccaccio (14th century) had emanzipated Poetry against Theology. Well, this looks more a wish than reality. Actually we had observed in earlier discussions, that Petrarca had his early fame as a scholar and not as a poet. And Boccaccio knew difficult social conditions in his life, so "Poetry" didn't do well in those times. Something like "fame for the poets" seems to have developed in the 1430s, especially clear through the Trionfi poem development, which we researched in detail.

Well, and we have, that Petrarca got the title poetus laureatus in Rome 1341 (100 years beore the poetical contest in Florence.

... and Lazzarelli got the title of poetus laureatus as a very young man, more or less just cause of being at the right place, when the emperor arrived in Italy and giving a speech, which all the Germans likely didn't understand.

... for Germany we have, that Conrad Celtes got the title "poetus laureatus" from emperor Fredrick III in 1487, and Maximilian made him first professor for poetry in Vienna, which had then the consequence, that we got a lot of German poeti laureati in the following time.
Similar teaching occupations, less attractive, Celtis had at other German places before since he had finished his studies (1486 with a travel to Italy). It seems clear, that "Poetry" in Mantegna Tarocchi can't have come from a German influence ... or only indirect, just with the Lazzarelli action, when Lazzarelli became poetus laureatus. Pinturicchio in Siena after 1500 (a time, when the German emperor Maximilian was interesting enough), a painting showing the crowning of Piccolomini by Fredrick III. as poetus laureatus (detail).
Complete picture:
http://www.zeno.org/Kunstwerke.images/I ... =486517414

I know of these 3 occasions, when Fredrick III used the title as a political instrument, not more. Before Piccolomini there wasn't much use for it a longer time (as far I can see it), likely cause of the big depression by the plague.
Huck
http://trionfi.com

Users browsing this forum: No registered users and 13 guests