#1 by Huck
The following context is not clear to me: Who is Aurelia Gonzaga Visconti?

W. Hughes Willshire, in his remarks on the General History of Playing-Cards, says: "The most ancient cards which have come down to us are of the Tarot's character. These are the four cards of the Musée Correr at Venice; the seventeen pieces of the Paris Cabinet (erroneously often called the Gringonneur, or Charles VI cards of 1392), five Venetian Tarots of the fifteenth century, in the opinion of some not of an earlier date than 1425; and the series of cards belonging to a Minchiate set, in the possession of the Countess Aurelia Visconti Gonzaga at Milan, when Cicognara wrote."

The most ancient cards which have come down to us are of the
tarots character. These are the four cards of the Musee Correr at
Venice; the seventeen pieces of the Paris Cabinet (erroneously called
often the Gringonneur, or Charles VI. cards of 1392) fine Venetian
tarots of the fifteenth century, in the opinion of some not of an*
earlier date than 1425 ; and the series of cards belonging to a Min-
chiate set in the possession of the Countess Aurelia Visconti Gonzaga
at Milan, when Cicognara wrote. The date of the latter may be
concluded from the emblematic design of Love having on it the
combined armorials of the Prince Visconti and of Beatrice Tenda,
who was married to Filippo Maria Visconti in 1413, and ordained to
death by him in 1418. It is true that the cards of the Musee Correr ...

... are not emblematic ones, and therefore not in themselves true tarots
nor atutti, but they are numerals of the particular suit marks, viz.,
spade, coppe, danari, bastoni, which used to accompany the emble-
matic cards of the old Venetian sets, and hence may be assumed to
have formed part of a combined tarots sequence, probably the same
to which belong the twenty-three cards once in the cabinet of Cicog-
nara, and now in the possession of MM. Tross Freres at Paris, and
described by Merlin in the note at page 90 of his treatise.

For Museum Correr I once found the following and wrote about it at Aeclectic
http://tarotforum.net/showthread.php?p=2954419 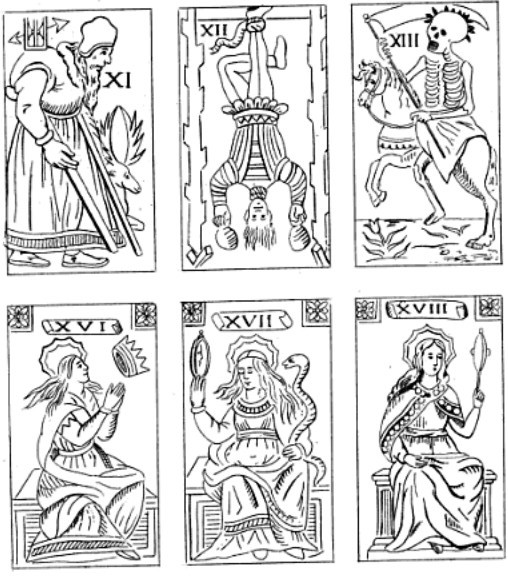 A very similar deck to that of the Ronciglione pdf is given in re-engraved form by the author Merlin in the 1860s. Merlin noted, that such a deck would be in the Museum Correr then.

The Museum shows this cards ... 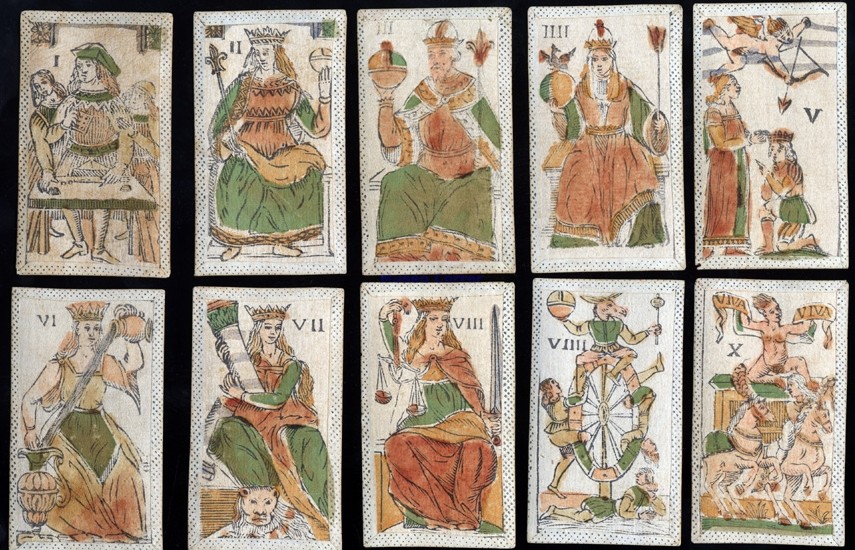 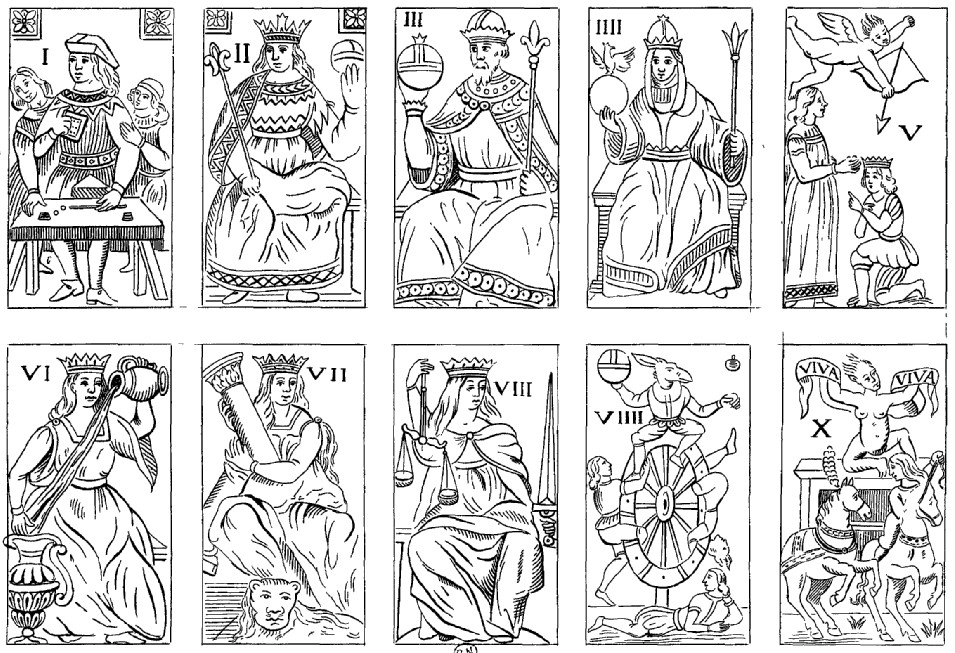 From all this I assumed, that Aurelia Gonzaga Visconti was just the owner contemporary to Cicognara 1832) of a Minchiate, which possibly might be identical to that, which is now owned by the Correr Museum, and which was presented by Merlin in 1869.

There I'm confused. The Cary-Yale Tarocchi is also called Tarocchi Modrone, cause it had been in the possession of the Visconti di Modrone family.

Looking through it, I find, that Mathers writes "quoting Willshire" : "These are the four cards of the Musée Correr at Venice; the seventeen pieces of the Paris Cabinet (erroneously often called the Gringonneur, or Charles VI cards of 1392), five Venetian Tarots of the fifteenth century, in the opinion of some not of an earlier date than 1425; "

But Willshire said: "These are the four cards of the Musee Correr at
Venice; the seventeen pieces of the Paris Cabinet (erroneously called
often the Gringonneur, or Charles VI. cards of 1392) fine Venetian
tarots of the fifteenth century, in the opinion of some not of an*
earlier date than 1425 ;"

Mathers speaks of "five Tarots", but it are "fine Tarots" and this seems to relate to the 17 Gringonneur cards.

For the "Minchiate" of Aurelia Gonzaga Visconti it perhaps must be assumed, that she was just owner of the Cary Yale Tarocchi, and this was addressed as "Minchiate". So she possibly has nothing to do with the Minchiate cards in the Correr museum. 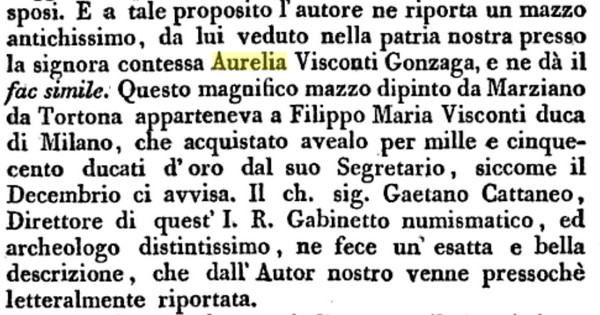 http://it.wikipedia.org/wiki/Mausoleo_V ... di_Modrone
A Mausoleo of the Visconti di Modrone, and Aurelia is one of the oldest there.

Here I find her parents ...

There she is ... For the Cary Yale Tarocchi cards we naturally don't know, if they came from the Visconti line or from the Gonzaga line or were just bought by not defined ways.

But nonetheless her ancestors are interesting:

Lucrezia Sforza was illegitimate daughter to bishop Ottaviano Sforza.
In 1512 the Sforza reign was reinstalled with the young Massimiliano Sforza, who became a disappointment. At 20th of June 1512 Ottaviano took possession of Milan in the name of Massimiliano. As the "eldest of the Sforza" he naturally had a role of some importance, likely close to Isabella d'Este, who also got some merits in the reinstallation of the Sforza power in 1512. Isabella d'Este ... a playing card collector, as we know. Ottaviano had some "regency function" for the inexperieced Massimilano. This relation had a crisis in 1515 ..
http://books.google.de/books?id=tYg9AAA ... za&f=false
... and anyway, The French attacked in September 1515, and both, Massimilano and Ottaviano, had problems. Massimilano became a sort of "free prisoner" in France, Ottaviano's problems are not so clear. Likely he had to hide some of his treasures, that they they didn't became booty of the plundering French soldiers. Ottaviano could - likely - save a few things by giving them to his daughter Lucrezia in Vescovado (I'm not sure ... where this is, maybe 11 km distance NE to Cremona).
Lucrezia married the heir Francesco Gonzaga ...

From Cartwright, "Isabella d'Este, marchioness of Mantua, 1474-1539; a study of the renaissance", vol 2
http://www.archive.org/stream/isabellad ... j_djvu.txt

That summer [1523] Isabella and her family were once
more thrown into mourning by the death of her
brother-in-law Giovanni Gonzaga and his wife Laura
Bentivoglio, who both died in the same week, the one
in the last days of August, the other on the 4th of Sep-
tember. Giovanni had always shown himself the most
loyal of subjects to his brother and nephew, and his
house in the BorgoPradella had been the scene of many
pleasant family gatherings. The loss of this honest
and genial prince was deeply regretted by Isabella,
and even more by Duchess Elisabetta, who was ten-
derly attached to her youngest brother, and had little
in common with his sons. The eldest, Alessandro,
was chiefly notorious for his quarrelsome temper and
inveterate love of gambling, and wasted both his time
and patrimony at cards.

According this the father Giovanni died in 1523 together with his wife Laura Bentivoglio. According euweb.genealogy (see above) the son Francesco died (Lucrezia's husband) and his mother Laura. So that's a contradiction and it's difficult to decide, which version is wrong.
Interesting is the remark ...." The eldest, Alessandro, was chiefly notorious for his quarrelsome temper and
inveterate love of gambling, and wasted both his time and patrimony at cards" ... which gives evidence, that card playing was definitely present.
Anyway, Lucrezia became a young widow in this time. A short time before the French were thrown out of Lombardy - again, and soon later would follow the battle of Pavia (1425) with new French troops in the region. And the Sforza reign was restored - again. So Ottaviano regained some of his influence.

About 10 years (1535) later the last Sforza duke died in Milan, and Ottaviano would have been the legal heir ... according Ottaviano's opinion. Reality saw this different. Ottaviano escaped to Venice, accompanied by Lucrezia.

This scene got literary fame, cause it became the frame story for a story collection, first published 1540 (25 storries), later published in 1550 in an enlarged edition an somehow still in work at the death of the author. It was translated to French in 1572 and then somehow it contained a Tarocchi passage.
We talked about this, somehow "unfinished" ...

Well, it might be, that the Cary-Yale Tarocchi took its way to the Gonzaas of Vescavado and found back to the Visconti family, when Aurelia Gonzaga married a Visconti.

The ladies, and the gentlemen as well, declared with one voice
that everything should be left to the Signora's decision ; and she,
when she perceived their will, turned towards the noble company and
said : " Since it pleases you that I should settle the order of our
entertainment, I, for my part, would counsel that every evening, as
long as Carnival lasts, we should begin with a dance ; then that five
ladies should sing some song of their own choosing, and this finished,
that these five ladies, in order to be determined by lot, should tell
some story, ending with an enigma which we will solve, if our wit be
sufficient therefor. At the end of the story-telling we will disperse
to our homes for the night. But if these propositions of mine be
not acceptable to you, I will readily bow to any other which may
please you, and now I invite you to make your wishes known."

Users browsing this forum: No registered users and 18 guests