#1 by Huck
Yesterday occurred an earthquake in the region of Ferrara, Mantova and Modena.

It made me looking for earlier earthquakes in the same region. There was a very big one in 1570 in Ferrara:

So we have here a correlation: A strong and surprising decline of economical activities in Ferrara since November 1570 (and likely this decline had also consequences on Tarocchi card production in Ferrara) in the course of f tremendous earthquake, and then the increase (or real begin) of Tarot card production in France ... and that's somehow after the future new French king Henry III had made a visit of Ferrara during his return of Poland in 1574, described in this festival book: 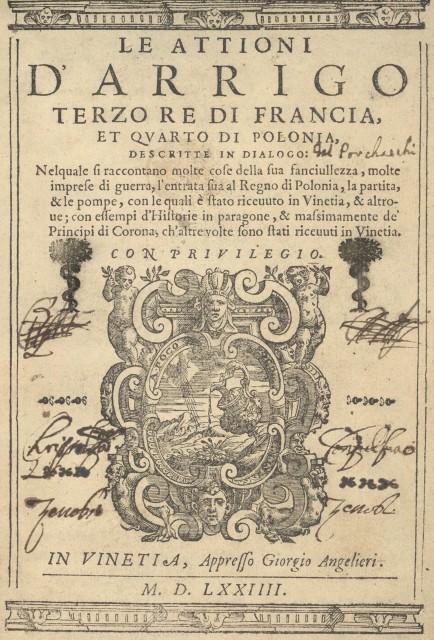 Well, I think, this is a not-accidental, remarkable finding.

The article to the Ferrara earthquake of 1570 pointed to another earthquake in Ferrara in 1504. As 1504 is very near to the often discusssed date of Alfonso's Taroch card production in June 1505, I took up a research of this event, too.

The earthquake of 25 July 1365 hit a limited area of
Bologna and its most immediate surroundings, causing
some damage to the main buildings of the city. Written
accounts were found of partial collapse and damage to
churches, buildings and to two unidentified towers. The
earthquake was also felt in Ferrara.
The shock of 4 May 1433 induced the collapse of a few
buildings. However, details of the effects are missing. The
shock was felt on a rather large area, which includes Modena,
Forlı`, Lucca and Firenze.
The earthquake of 20–21 December 1455 hit Bologna
and the hills of the medium valley of the river Reno,
inducing diffuse damage to houses and churches. The
most frequent damage was: falling of chimneys and
merlons, collapse of upper parts of a few steeples and failure
of keystones in some of the larger buildings. No damage to
the Asinelli Tower is mentioned. This earthquake was also
felt in Mantova and Lucca.
The most severe damage to the town buildings was
caused by a seismic sequence which started on 31
December 1504 and ended in January 1505. The shock
on 31 December caused some small damage in Bologna
and Modena, but was heavily felt in Ferrara. The much
stronger shock was a few days later, on 3 January 1505,
which struck Bologna heavily as well as the nearby
Appenine foothills. Damage reported in the written
sources concerned the urban, suburban and hillside
areas of Bologna. In the town, the most damaged buildings
had vaulted structures, e.g. monumental buildings
and churches, and the upper part of several towers. In
fact, a few of the latter had to be demolished or shortened
to avoid damage to nearby buildings. The most
damaged area of the town was between gate San Donato
and Gate Sant’Isaia, in the northern part of the city extending
towards the plain. Only in a few cases had a complete
structural collapse occurred, but extended damage to buildings
was frequent. The shock was felt on an extended area:
from Emilia, to Romagna, Veneto and Lombardia, down to
Firenze.

The article presents then an overview about earthquakes in Bologna: 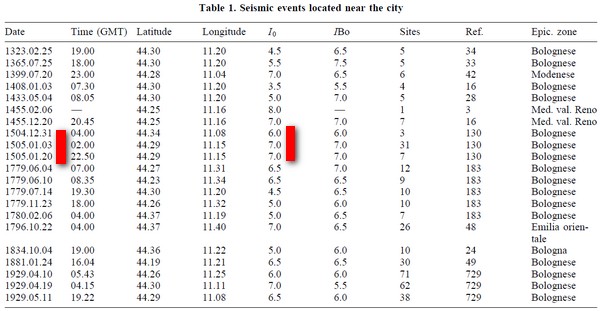 So short before he had three exciting earthquakes in his surrounding connected to all the bad news, which are connected to a near earthquake.
But likely Ferrara wasn't so deep hit as Bologna then. For Bologna we again can see, what happened: Weakened by the earthquake, the city was taken by Pope Julius in September 1506 and the long reigning Bentivoglio were driven away.
Interestingly the Bolognese overview doesn't mention the very large earthquake of Ferrara in 1570 in their list. It must have been locally either very small ... or they forgot it.

Here are pictures of the "Madonna de Terramoto" (earthquake Madonna), which were painted in 1505, and which show Bologna, how it looked before the earthquake.

Users browsing this forum: No registered users and 12 guests