#11 by dr bartolo
theese things indeed look minchiate-ish. you can see a tower on fire a few cards away from the "time" card, and it looks like the card that replaces "the tower" in the minchiate

I dont understand... why Orazi are sure the sheets are from the XVII century? I cant see any date or name of cardmarker...

Maybe I need read this book:

http://www.ronciglione-crs.it/CRS/home/ ... mmario.htm
When a man has a theory // Can’t keep his mind on nothing else (By Ross)

I dont understand... why Orazi are sure the sheets are from the XVII century? I cant see any date or name of cardmarker...

Maybe I need read this book:

I think, there's no evidence for card production in Ronciglinne before ca. 1580 (?). The cards were found in book-binding (juristic material) ... which might have happened later than the material in the book. So the writing of the text is not necessarily the date of production of the cards. In 17th century Ronciglione was definitely a card printing city of some importance.
Huck
http://trionfi.com

#14 by mmfilesi
OK. I found an interesting article to date this sheet...

In the chronicle of Nicola della Tucia said "in the year 1379 come to Viterbo the cards which are called Nayl by the saracinos". Its a document known.

The game of cards are forbiden. The penalty is a gold ducato.

The first cardmarker of Ronciglione? Michelangelo Mercuri da Tagliacozzo purchase the instruments necessary for the production of cards. The cost are 311 scudi.

Michelangelo Mercuri give the "house-prints" (I dont know the name in English: la imprenta) to her son Francesco Mercuri.

A trade agreement. Francesco Faccheres (from Bergamo), Francesco Valcarano (from Roma), Vincenzo Ferrini (from Roncigliano) agree with Pellegrini to buy almost all production. (They seem to distributors). 35 dozens of decks in week. Pellegrini will produce 6 more freely.

There are no more documents.

In 1649 Ronziglione is destroyed by the troops of the Pope. The Farnese lost the duchy and the city falls into a deep economic decline.

Well, maybe we can think between 1630 and 1649 (approximately) Ronciglione was an important center of card makers. At least important enough to export minchiate? Yes, may be.
When a man has a theory // Can’t keep his mind on nothing else (By Ross)

#15 by mmfilesi
This book seem interesting:

I cant read it, but in the title we can found a clue: from XVII to XVIII centurys.

Thats mind, the cardmarkers of Ronciglione survive the 1649 - disaster?

In this case, the sheet can be made in the XVIII centurys.
When a man has a theory // Can’t keep his mind on nothing else (By Ross)

#16 by Huck
The IPCS article from October 1989 has the two Minchiate sheets found in the binding of some notarial documents titled "1585". As already stated: the binding might have happened later.

The article speaks of evidence for playing card production from begin of 17th century till one century later. But it speaks also of a disastrious fire in 1799 ... so a question is, if the archive material is complete. Actually Ronciglione belonged to the Farnese since 1530 and it speaks of paper mills there already in 15th century. In 1534 - a few years later - Paul III, earlier cardinal Alessandro Farnese, became pope. Ronciglione later had a playing card production privilege for papal states beside Rome.
It seems logical to assume, that the card production privilege was gotten in the time, when Paul III. was pope ... but: no evidence. Then we have playing card prohibition for ...

Viterbo: November 1548 - then pope Paul III was still living. Viterbo is near to Ronciglione, but was not Farnese domain.

Then in 1558 for Ronciglione and Castro (both part of the Farnese domain ... in 1558 a pope (Paul IV) reigned, who was operating with matters of inquisition, book burning and possibly other forms of prohibitions. And possibly some movement was there to attack earlier Farnese privileges.

Hard to believe, that a city with paper mill in 15th century hadn't seen any playing card production before 17th century.

I cant read it, but in the title we can found a clue: from XVII to XVIII centurys.

Thats mind, the cardmarkers of Ronciglione survive the 1649 - disaster?

In this case, the sheet can be made in the XVIII centurys.

The original Farnese Southern countries were NorthWest of Viterbo. When Alessandro Farnese became cardinal (thanks to the beauty of his sister, lover of Alexander VI) they got more influence and got some territory SouthEast of Viterbo (Viterbo didn't belong to it). 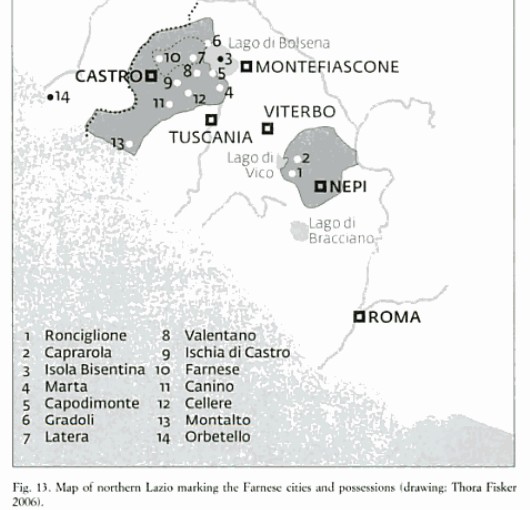 Before Alessandro got Ronciglione (1530), his sister Giulia had a governor post ... quoting myself:

His sister meanwhile was released in 1500 as lover of Alexander VI and went to Carbognano (10 km distance to Ronciglione). She returned 1505 to Rome and married her daughter Laura to a relative of the new pope Julius II. She had various lovers and then a new husband, but returned to Carbognano as a governor 1506, which she ruled with cleverness till 1522. Then she returned to Rome, in the household of her brother. In 1524 she died, 50 years old.

His sister knew the region. She had arranged herself with pope Julius II in 1505/06 ... who was once a foe of Alexander VI (and so of her).
Julius, when still cardinal, had ruled over Avignon, nearly 30 years. Avignon became then a successful center for playing card production, and, especially remarkable, it lost this state, when Julius went away from Avignon. Avignon was 1505 the second place, which had a documented Taroch card production ... well, just a month later, when his nephew had married the daughter of Giulia. Accident?

Julius knew about playing card production, especially the success of French card production, that's definite. Naturally, as pope, he couldn't indulge too much in this form of business. But surely he didn't forget about useful ways to have some income. It would be natural, that he passed his insider knowledge to a relative, another way of the usual nepotism. But whom? That's a good question.
And finally the Farnese and Ronciglione, a relative small location, had a card production privilege for the papal states.
Huck
http://trionfi.com

#18 by mmfilesi
Very interesting, thanks for the development.

Am I the only one who noticed that there is a deer at time's foot? anyone has an idea wht the deer is there?

#20 by mmfilesi
Hi friend, the deer is common associated with the Time, probably to symbolize that time passes (run) fast and light.

For example, in this ilustration of Petrarca's Trionfi

Users browsing this forum: No registered users and 17 guests