Chess and Playing Cards (Catalogue of games and implements for divination ...)
by Stewart Culin (1898)
https://archive.org/details/chessplayingcard00culi 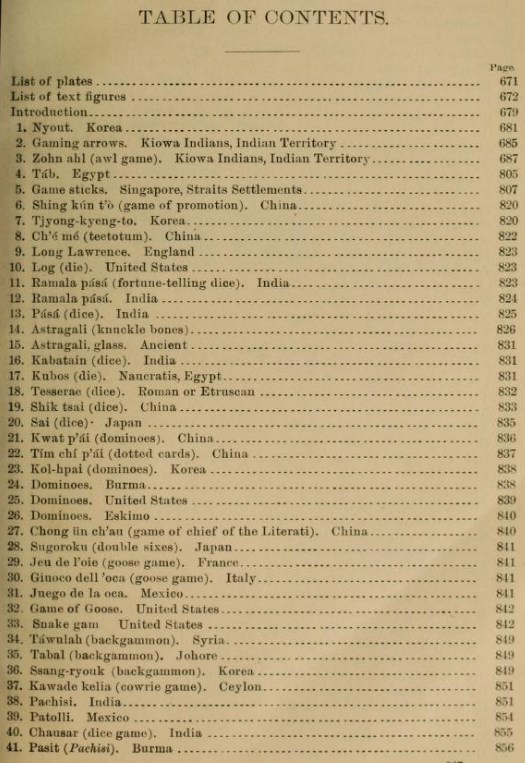 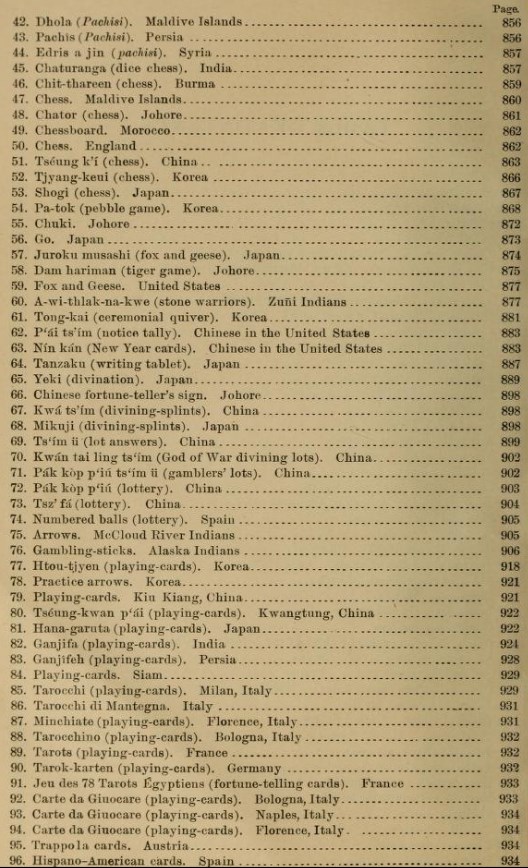 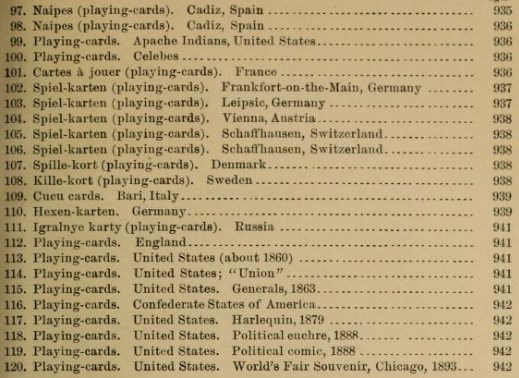 A deck of tam cúc has 32 cards with 2 kinds of set red and black. Each set has 1 general (tướng 將), 2 advisors (sĩ 士), 2 elephants (tượng 象), 2 chariots (xe 車), 2 cannons (pháo 砲), 2 horses (mã 馬), and 5 soldiers (chốt 卒).[2] The black side general is called tướng bà, and red side is called tướng ông.Red side soldiers are called sĩ điều. The rest of the cards are addressed by their name and color. The deck of the tam cúc is similar to Chinese chess pieces.

Soo sik p'ai ("four-colored" game) or Chü- ma p'ao p'ai ("chariot-horse-cannon") is another chess card deck type mentioned by Silvia Mann. It uses the same 7 chess figures and each color has 4 figures for each figure type (4x7 = 28 for each color). Decks have either 2x28 = 56 cards (2-colors-decks) or 4x28 = 112 cards (4-colors-deck). The deck is very far spread and it is played with from Taiwan till Singapore and Thailand till Borneo.
I found a rule description ...
http://www.cs.cmu.edu/~tnt/rules.html

This game and its numbers remind me on Tamerlane chess, which was played with 28 figures for each player (so 56 for both together) at a board with 112 fields (11x10 = 10 plus 2 citadel fields)


Next come the the 2 suited or hung p'ai ("Red cards"), which basically comprise black and red pieces with all values encompassed by a circle, making a pack of 70 cards, each suit having 4 of the main pieces, 10 pawns and a kin or "Gold" card. 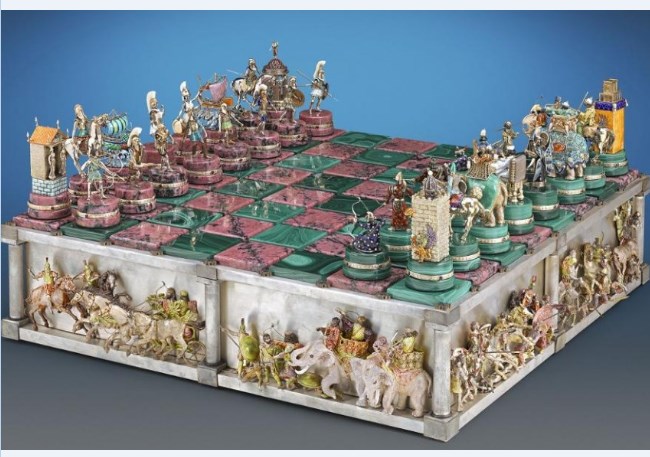 "Attention chess lovers and history buffs," says Eustacia Huen at Forbes: This extravagantly bejeweled chessboard is ready to be played, not just displayed. Named after a historic clash between the armies of Alexander the Great and Persia's Darius III, the Battle of Issus Chess Set ($1,650,000) was created late last century by a master jeweler who poured 14,000 hours into crafting its figurines, using 14 pounds of gold and 11 pounds of silver while accenting the work with pearls, garnets, turquoise, rose quartz, and enamel. Each figure is unique, down to the character's shoelaces, and the set is being sold with a mahogany table and two antique leather-upholstered chairs. The Week Staff

#106 by Huck
Recently I wrote about Chess playing cards .... 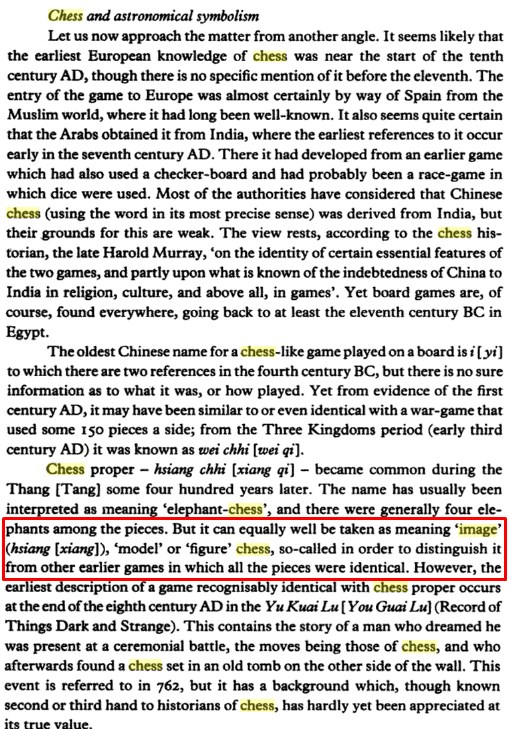 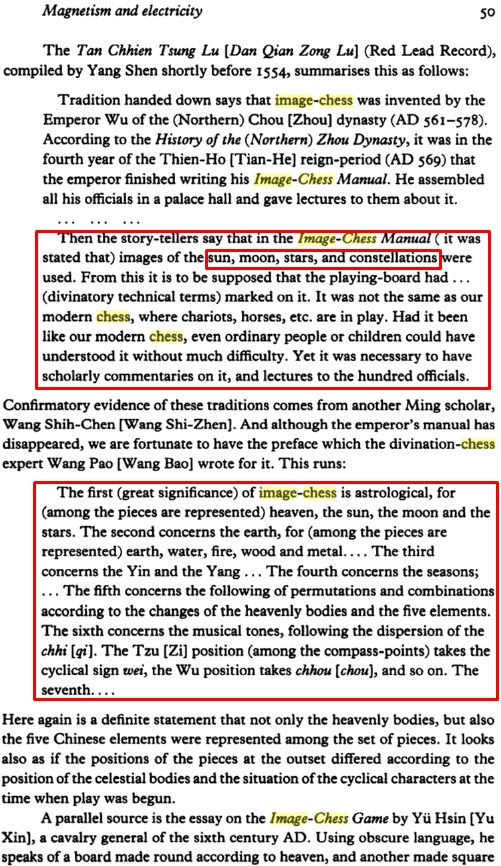 Common Chinese chess pieces are not figurative as in European chess, but just Chinese kanji placed on round pieces of wood or plastic or other material ...

China had paper much earlier than Europe, at least around 500 AD. It wouldn't be a surprize, if cheap chess sets were made also of hard paper occasionally, in other words, something similar to playing cards. From modern sets I know, that they were sold also with a larger piece of paper, which could be used as board, a rather practical solution.

The idea, that the Chinese name for Chinese chess (xiang qi) might be read as "image chess" (a name, that in our language world would naturally associate [2D] flat playing cards instead of [3D] round pieces of wood or figures), might make one suspicious. The connection between chess and playing cards is in the modern world still very clear for Chinese cards, much better than elsewhere, this at least is a clear fact.

What Needham and Ronan say about the use of astronomical content in this context (a rather wild use of many Chinese astronomical symbols, strongly connect to ideas based on I-Ching btw) remembers very much the Minchiate, with its 4 elements and 12 zodiac lines.

In the wiki-biography of Toscanelli (who worked for the Medici with his strong capabilities in the field of math) we find ...


In 1474 Toscanelli sent a letter and a map to his Portuguese correspondent Fernão Martins, priest at the Lisbon Cathedral, detailing a scheme for sailing westwards to reach the Spice Islands and Asia. Fernão Martins delivered his letter to the King Afonso V of Portugal, in his court of Lisbon. The original of this letter was lost, but its existence is known through Toscanelli himself, who later transcribed it along with the map and sent it to Christopher Columbus, who carried them with him during his first voyage to the new world.[2] Toscanelli had miscalculated Asia as being 5,000 miles longer than it really was and Columbus miscalculated the circumference of the Earth by 25 percent both of which resulted in Columbus not realizing initially he had found a new continent.[3] Toscanelli lived most of his life in Florence, with occasional excursions to Todi and Rome. He is said to have entered into correspondence with scholars around Europe, but his writings have yet to be thoroughly researched. An uncorroborated story links Toscanelli's attendance at a Chinese delegation to the Pope in 1432, when many Chinese inventions were discussed, with a flood of drawings made around the same year by the artist-engineer Taccola (1382 – c.1453), which were later developed by Brunelleschi and Leonardo da Vinci. In a 1474 letter of Toscanelli to Columbus, the authenticity of which has been a matter of disagreement among scholars,[4][5] Toscanelli mentions the visit of men from Cathay (China) during the reign of Pope Eugenius IV (1431–1447):

"Also in the time of Eugenius one of them [of Cathay] came to Eugenius, who affirmed their great kindness towards Christians, and I had a long conversation with him on many subjects, about the magnitude of their rivers in length and breath, and on the multitude of cities on the banks of rivers. He said that on one river there were near 200 cities with marble bridges great in length and breadth, and everywhere adorned with columns. This country is worth seeking by the Latins, not only because great wealth may be obtained from it, gold and silver, all sorts of gems, and spices, which never reach us; but also on account of its learned men, philosophers, and expert astrologers, and by what skill and art so powerful and magnificent a province is governed, as well as how their wars are conducted."

— Extract of the First Letter of Paolo Toscanelli to Columbus.[6][7]
It has been suggested that the man in question may have been Niccolo da Conti, who was returning from the east and is known to have met with Pope Eugenius in 1444.[8] In a second letter, Toscanelli further describes these men as extremely learned and willing to share their knowledge:

"The said voyage is not only possible, but it is true, and certain to be honourable and to yield incalculable profit, and very great fame among all Christians. But you cannot know this perfectly save through experience and practice, as I have had in the form of the most copious and good and true information from distinguished men of great learning who have come from the said parts, here in the court of Rome, and from others being merchants who have had business for a long time in those parts, men of high authority."

— Extract of the First Letter of Paolo Toscanelli to Columbus.[9]

The webpage http://www.gavinmenzies.net/ goes deeper into the context, connected to the publication of various books. His results are disputed.
https://en.wikipedia.org/wiki/Gavin_Menzies

I personally think, that this card (Moon of Charles VI Trionfi) ... It used in its divination scheme 16 questions, 16 Kings and 16 groups of 4 items (totally 64). If it was inspired in its structure by chess is a good question.

The whole book can be seen at ...
https://bildsuche.digitale-sammlungen.d ... v=100&nav=
... the link starts at the section, which presents the 4 Altväter.
Huck
http://trionfi.com

The 4-player chess is evaluated as a possible origin of the playing cards. The thread starts with the discussion of a manuscript of Bidev.


mikeh wrote:In relation to traces of playing cards in Spain before 1377, Franco Pratesi quoted from a 26 page typescript of 1979, apparently unpublished, by the Yugoslav/Macedonian Prof. Pavle Bidev (1912-1988). It is written as a response to Michael Dummett’s 1979 review of his 1973 book Die Spanische Herkunft der Spielkarte [Spanish Origin of Playing Cards]. Dummett’s review can be read at http://askalexander.org/display/22493/T ... 4?pw=Bidev and following (Journal of the IPCS, vol. 7, pp. 75-78). The essay touches on topics of concern in several other recent threads, notably those having to do with John of Rheinfelden, the relationship of his work to that of Cessolis on chess, the relationship between chess and playing cards generally, and the role of divination in the origin of playing cards. it is rather different in orientation from most of what we see on this forum.

A player-chess was mentioned in the context of king Edward in 1277. It was speculated in the past, that the game noted in the document has to be interpreted as playing-cards.

In chess history the possibility was discussed, if this game, which was later identified as the Indian Chaturaji, had been the original version.
https://en.wikipedia.org/wiki/Chaturaji
Huck
http://trionfi.com

Users browsing this forum: No registered users and 33 guests