I making a experiment...

Up Male, Down Female.

Up Female, Down Male

a. Sun - Moon. Good convergence: Armony (in to the time?)

b. 1. Hymeneo (male) - 2. Neptune . Good convergence: generation, many children in the married


Thats mind: good fortune
When a man has a theory // Can’t keep his mind on nothing else (By Ross)

Who is Licaste? The usual messenger has the same gender as the god.

If there is a intended mirroring between the both groups, perhaps this way ...

#54 by Huck
Perhaps we should also take a look at the other art of Montefeltro:

but is he mentioned in the text?

No. I am research in process. In any case, it seems that his theories were in vogue. I'll read it his treatise.

I don know another Licaste. But is danger. Thats name is not in the old edition (fol. 36, lost). I found it in the nineteenth century edition, which has errors. Be careful.

We have numbers odd, male in neoplatonic matecosmic, and pairs, females. And we have music (Gaffurio, spheres music), and cosmic dance... well. Perhaps we need think in 1, 2, 3, 4, 9, 8, 27 and triads, and circles or triangles.
When a man has a theory // Can’t keep his mind on nothing else (By Ross)

No. I am research in process. In any case, it seems that his theories were in vogue. I'll read it his treatise.

We have Bessarion between the 28 famous men. Likely there were not too much persons, which Montefeltro actually knew. And not much living persons, if any. Was he himself between them ? Justus von Gent made a Sixtus portrait, was it included between the 28? Was he between them? How many persons we might exclude from the 28 as modern and how many are "old"? Perhaps we get the relation 24+4 ?

We have numbers odd, male in neoplatonic matecosmic, and pairs, females. And we have music (Gaffurio, spheres music), and cosmic dance... well. Perhaps we need think in 1, 2, 3, 4, 9, 8, 27 and triads, and circles or triangles.

It's an idea, but this sounds too complicated, I would assume.

Perhaps we should get security about local details first.

When the Aragonese wedding entourage arrives the city, the bride has first to stay one night outside (probably a rule) ... I guess, that this happens in Castello Novilara. Costanzo visits the castle, but isn't allowed to see Camilla. Diana = Chastity hinders him. That's a scene for the pair Mars-Diana, which appears in the banquet.

In the poem at page 1 is addressed Fama, Apollo and the 4 elements ... do we have the 4 elements somewhere? Could this be an allegory of the 4 Elements?

Upon awakening going to the Great Hall.

= AIR
[/quote]
4 Elements appear in the Minchiate later, then they are arranged before (or after, if we count from top) the zodiac, which in this wedding is the banquet. As far I see it, it's not indicated in the text ... are the elements elsewhere? 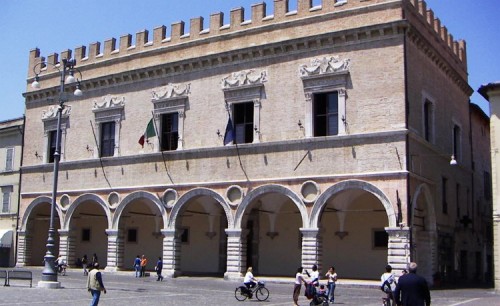 #57 by mmfilesi
I need time. I cant answer quickly. But, I think it's good to know what relationship Constantia and Camilla With Castor and Pollux. They are the passive agents. Castor and Pollux receive the emblems, the gifts of the gods and give them to the bride and groom. "The wedding was held in May? Gemini: May 22-June 21

mmfilesi wrote:I need time. I cant answer quickly. But, I think it's good to know what relationship Constantia and Camilla With Castor and Pollux. They are the passive agents. Castor and Pollux receive the emblems, the gifts of the gods and give them to the bride and groom. "The wedding was held in May? Gemini: May 22-June 21

Yes, this is one argument.

We have the first note of a game called Minchiate in 1466 in a letter of Luigi Pulci to Lorenzo Medici. 1471 and 1477 the game is mentioned again, in 1477 it is "allowed". We cannot be sure, that this game was similar to the game with the name Germini, which later appears in Florence in 16th century. In ca. 1552 a game exists, which has 40 trumps and probably a similar game structure as the deck version of 1725, which is complete and known ... and as we know it.
The later Minchiate had 40 trumps and these were arranged in the manner, that cards 1-15 + 5 unnumbered cards builded one half (similar to usual Trionfi or Tarot cards) and the 20 other consisted of the cards 16-35 and presented 3 theological virtues + Prudentia, 4 natural elements and 12 zodiac signs. The whole coulb be described as a 2x20-structure.

"Germini" is taken from "Gemini", as the card of Gemini is the highest numbered trump (Nr. 35). Germini is also taken from a game Gherminella in 14th century Florence, which was played with a stick and two cords, and used to play humble betting games for money. The two cords were "twins". Geminella was used for a specific type of pasta, which looked a little bit like two Gherminella cords.

In the 5x14-theory, which assumes, that early Trionfi decks had mainly 5x14 (14 special cards) or arrangements with 16 special cards, the development is assumed, that 6 additional cards were developed for the 5x14-deck during the Ippolita marriage in May 1465. Then - hypothetical - a deck existed with 4x14 + 20 cards ... the socalled Pierpont-Morgan-Bergamo-deck.
In a part of the background of this activity the young Lorenzo de Medici from Florence participated (hypothetically). The circle of youth around Lorenzo + the elder poet Luigi Pulci are expected to have experimented with different Trionfi cards and sets - at least this is a plausible idea, as Lorenzo and Pulci exchanged about the Minchiate game.
The highest card in this deck was the World card, showing two putti, interpretable as "twins".

Possibly it's the first deck, which arranged it's permanent trumps higher than 16. So the idea with twins or "Gemini" cards might be already playing card custom in 1475.

In Chess we had with the Cessolis interpretation, that the pawns were specialized to individual professions according the chess officers behind, for instance the queen pawn was physician, as women need physician, and the knights had a smith and a doorkeeper, as knights need smiths for their weapons and doorkeepers to give alarm in cases, when the city is attacked.

So the pawns became twins to the chess officers, similar as we find 12 gods with messenger in the wedding book of 1475.

Generally playing card sets can be interpreted as twin structure, as 2 suits usually did run from 1-10 and 2
did run from 10-1. The expression "paro" (pair) was used to signify "one deck" already in 14th century.

And so we have Castor and Pollux in a special function in the wedding book 1475, operating on the base of a broad tradition ... .-)
Huck
http://trionfi.com

Now, I need more time to reflect about this ...

#60 by Huck
In Greek mythology we had the twin kings in the Sparta region ... which caused a lot of twins in mythology. One of these twin constructions was the swan-eggs of Leda by Zeus.

Castor and Pollux must be seen in context to Helena - Klytemnaestra, their sisters. These both marry two brothers, Menelaos - Agamemnon. Klytemnaestra is killed - so she could die. Helena didn't die. Similar the brothers - a mix of immortality and mortality.

So they fit with the other gods-messengers pairs.
Huck
http://trionfi.com

Users browsing this forum: No registered users and 48 guests