What are the documents for Marziano's dates?

#451 by Huck
There is a letter mentioned, which was written at the "sixteenth" (of what month?) by Filippo Maria Visconti and which reached the emperor, after he was back at the Bosporos. Any idea, how to search for it?
Huck
http://trionfi.com

Huck wrote: ↑
23 Aug 2020, 11:43
There is a letter mentioned, which was written at the "sixteenth" (of what month?) by Filippo Maria Visconti and which reached the emperor, after he was back at the Bosporos. Any idea, how to search for it?

I'll just start with the Revue de l'Orient latin, which seems to be what Setton is referring to. I'll guess that "the sixteenth" is 16 November, but I'll keep my bet here win or lose.

I'll post them. It seems to have other dates to pinpoint his itinerary. #453 by Huck
Nice ... :-) ... if it was the 16th of November one might conclude, that Filippo Maria had a note of John, when he would arrive at home. When he arrived indeed at 1st of November, the time would be short for a letter from Constantinople to Milan .... I guess only. One of the sources mentioned "late October" instead. Actually one would need a list with times, in which specific distances were crossed with horse or ship ... in medieval time.
Huck
http://trionfi.com

... if it was the 16th of November one might conclude, that Filippo Maria had a note of John, when he would arrive at home. When he arrived indeed at 1st of November, the time would be short for a letter from Constantinople to Milan .... I guess only. One of the sources mentioned "late October" instead. Actually one would need a list with times, in which specific distances were crossed with horse or ship ... in medieval time.

This helps to give one an idea.
https://writemedieval.livejournal.com/4706.html

E.g. - "Drawing on the work of Italian historian Federico Melis, [Peter] Spufford also discusses what we can discover by looking at the dates that letters were sent and received in late fourteenth and early fifteenth-century Italy. These sources tell us about the speed of messengers, who usually travelled lighter and faster than other people.


'The 17,000 letters between Florence and Genoa normally took 5 to 7 days to deliver, as did the 7,000 letters between Florence and Venice. Outside northern Italy delivery times were not so consistent. The 13,000 letters between Barcelona and Valencia normally took between 3 and 6 days to arrive. If a greater distance was involved, including travel by boat, the times were even more variable. The 348 letters between London and Naples varied in delivery times from 27 to 75 days, although most arrived between 32 and 54 days after despatch. This should be compared to Uzzanno’s note that letters from Florence to London (over 1,500 km plus the Channel crossing) should take under 30 days. Real couriers could travel faster than expectations as well as a great deal slower. Water could be faster than land, for most of the 493 letters between Venice and Constantinople were delivered in 34 to 46 days.' (p. 27)'

From Peter Spufford, Power and Profit: The Merchant in Medieval Europe -
https://books.google.ca/books?id=Dn2aPw ... SzCg&hl=en

It seems safer to assume a date in October for John Palaeologus' arrival back home, so that Filippo Maria had time to receive the news, and write his letter of 16 November. Still, it was faster than the average times Spufford gives for Venice-Constantinople mail correspondence.

#455 by Ross G. R. Caldwell
Here is the letter from Filippo Maria on 2 May 1424, sent from Cusago to Pavia. It says "cras," which means "tomorrow," so I think we have to take it seriously. Perhaps the emperor went ahead with a smaller number of people, and left some behind in Milan to write the letter of 4 May sent from Milan. Perhaps he wanted to see the famous castle, and it was closer to the Po, where he might have left to start on his way to Hungary. 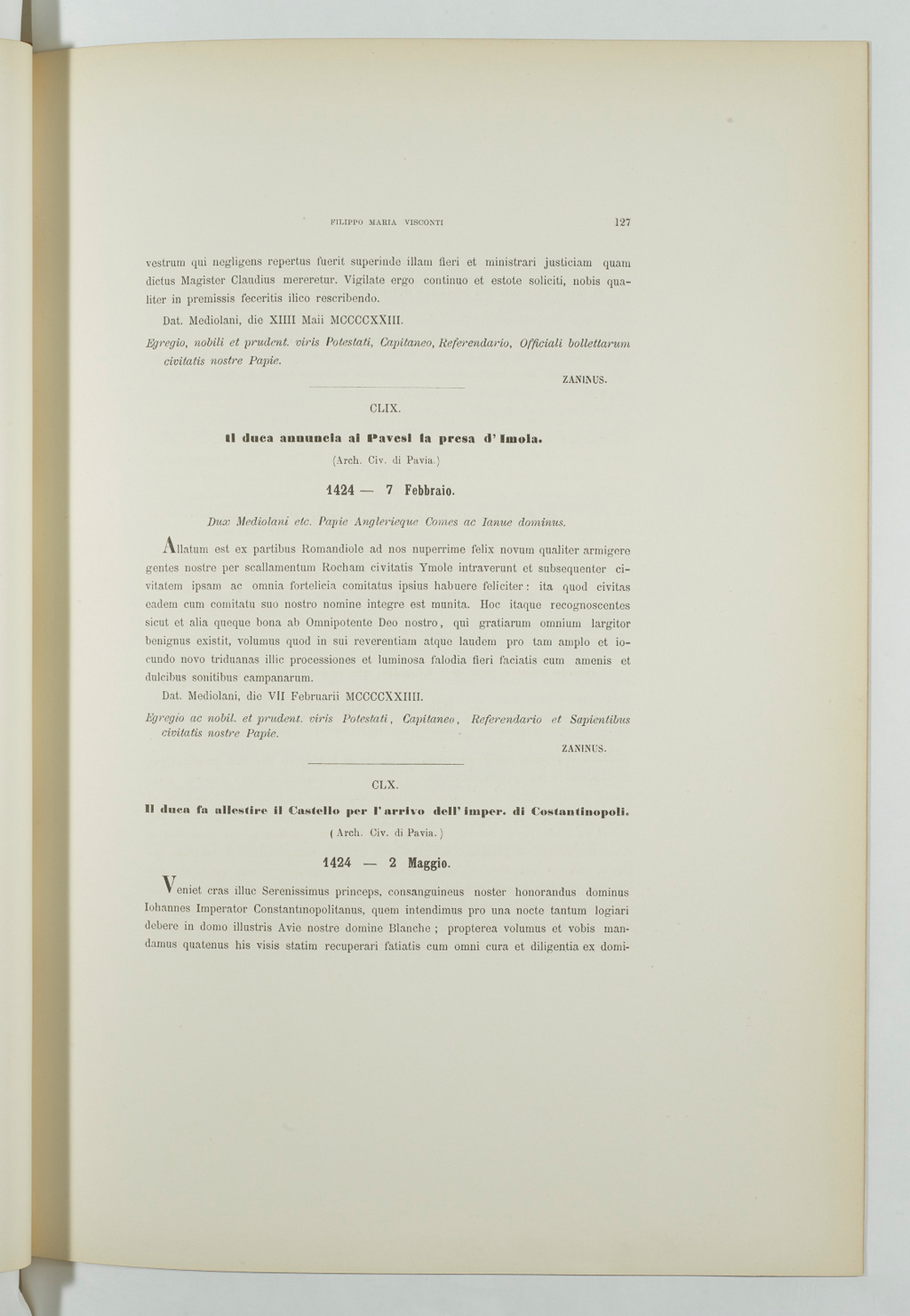 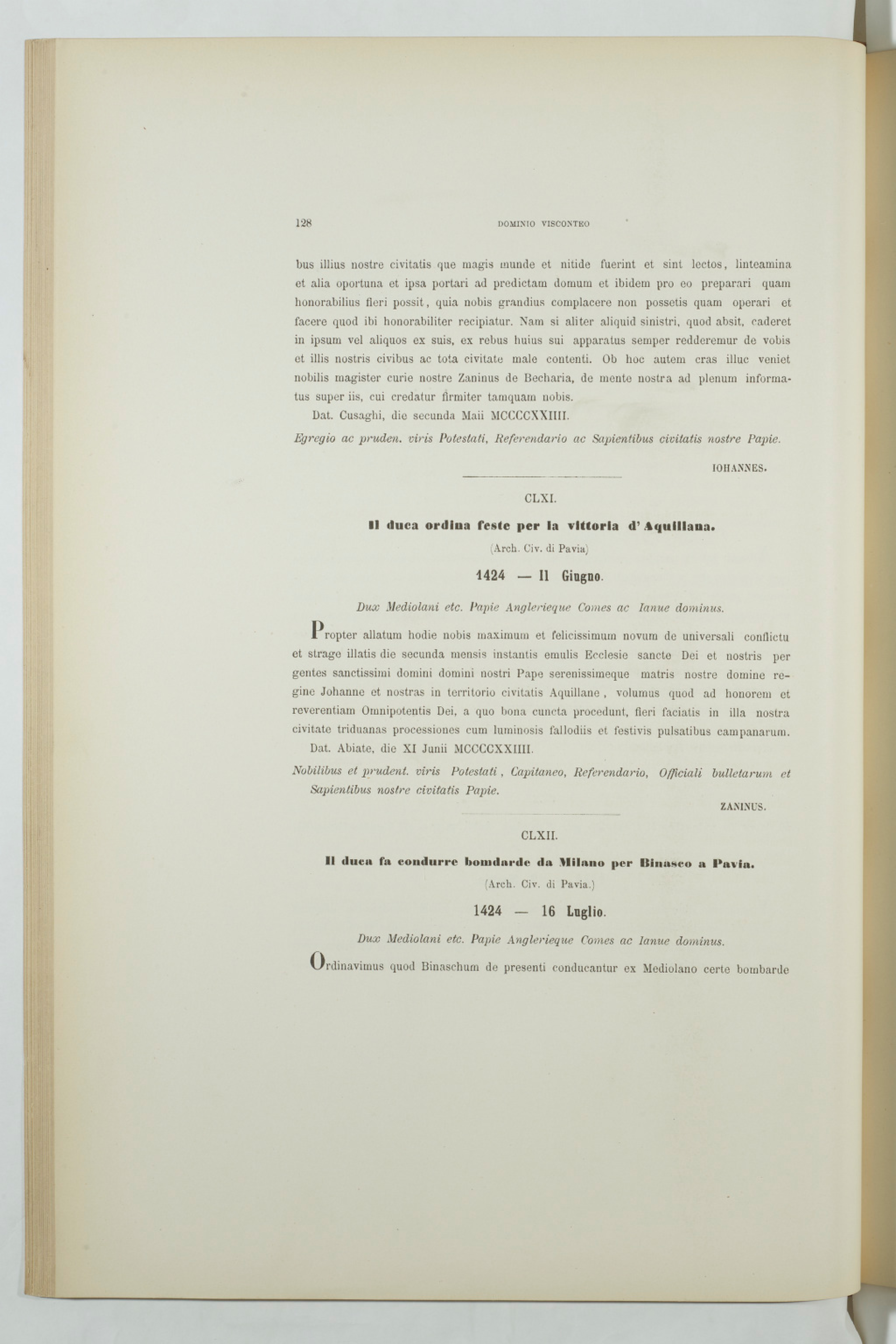 #457 by Ross G. R. Caldwell
What I find nicest about this letter is that Filippo Maria doesn't call it a "castle," he calls it "the house of our illustrious grandmother, the lady Bianca." This is what I read from "in domo illustris Avie nostre domine Blanche."

It seems to me to be an intimate glimpse of how he felt about the castle in Pavia, where he had spent his entire childhood and adolescence.

#458 by Huck
From Pavia it isn't far to Montferrat, which also was ruled by the Palaiologos family. And there were the parents of his wife Sophia. Possibly not a reason to go there (the marriage was divorced 2 years later). But who knows. 55 km distance between Pavia and Casale Monferrato. Possibly the marriage was divorced, cause Sophia didn't get children. However, the 3rd wife also didn't get children.

John made to Venice the suggestion, that he could generate a peace between Hungary and Venice (somehow there must have been a war between them, which I don't understand completely(). Somewhere I've read the interpretation, that before he could deal with the peace action, he had to get the agreement of Filippo Maria (what I also didn't understand completely). So he went to Milan. I don't remember, where I've read this.
Sigismund once engaged against the Osmans with some intensity (1396, battle of Nicopolis). Perhaps that's the reason, why John is strongly engaged to get help of him.
Abbiategrasso has 30 km distance to Pavia and 44 km distance to Casale Monferrato. If one knows a list of the Filippo Maria letters, one can judge, how often Filippo Maria was in Abbiategrasso in 1424.
Huck
http://trionfi.com

No one has done a complete collection of all of his letters. I don't know if it is possible, really. Filippo Maria Visconti was a major force in world politics for 35 years; letters from him and to him are all over the place, most of them not published. There is not even a biography of Filippo Maria Visconti himself, as a monograph. Except for Decembrio, which is not modern and does not offer the details modern historians want. We can only go to Butti and Fossati's notes, which bring us to up to 1925, which is pretty good, but it still lacks Caterina Santoro, who published a synopsis all of his letters from the Registers of the Office of Provvisione in 1929. And that is only one source, dealing with Milan.

The best we can do is to answer such a question would be to look for the earliest and the latest letters we could find from Abbiategrasso in 1424-1425. But always, the first step would be to look at the Butti-Fossati Decembrio, and see if either of them offers a list of his stays at Abbiategrasso, coming as a note to where Decembrio mentions it.

#460 by Huck
The duchy has the plague at least since mid 1423. Agnese del Maino is pregnant (twice) and Filippo Maria needs urgently a heir. Abbiategrasso is later the place for Agnese del Maino. As far I remember the dead child of Agnese had been born before Bianca Maria (* March 1425). Wrong ... she was born 1426, says wiki.
Klaus Schelle (? as I remember) makes the remark, that Filippo Maria started his more or less private life outside of public attention c 1421. The plague, the twice pregnant woman and the development of his solitairy life-style go all together. And Agnese stays in Abbiategrasso with his single daughter. Probably the second dead daughter causes, that Filippo Maria marries a second time in 1427. This was in December.

Interestingly John VIII of Byzanz divorced in 1426 and remarried 1427 in September. This case didn't work and the marriage of Filippo Maria also didn't work. And both had before the same woman Sophia, Filippo as a proposed husband, and John in the real normal manner.
Emperor Sigismund had also problems with the missing heir. King Wenzel dito.

I took a curious look ... I detected a theatre play and a text of 2016. We had great history articles in a German encyclopedia Ersch-Gruber in 19th century. Unluckily it was never finished and V as Visconti and S as Sforza weren't part of the finished letters. If one wants to become famous one better has a name with starts with A and not a name, which starts with Z.

Users browsing this forum: No registered users and 14 guests