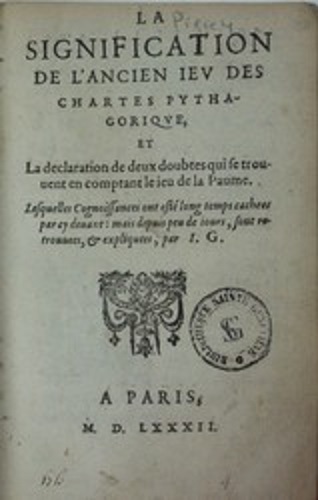 I'm grateful to Michael Howard for all his precious contributions to this topic.
Special thanks also to Steve Mangan
http://www.sgdl-auteurs.org/alain-bouge ... Biographie
mikeh
mikeh

#662 by mikeh
I have been rereading Gosselin, looking to see if there is anything more to say, after a hiatus of a year and a half since my last post. Well, I can at least identify a couple of problems, both having to do with the object of the game Trente et Un.

Gosselin says, "the player of this game seeks the highest score he can, in order to reach, but without exceeding, the number 31." That sounds like the object is in part not to go over 31. But then he adds "Or at least to get closer to the number 31 than any other player," I assume that means "closer, but still not over 31". So that is one problem. What does he mean? An account of the rules of one version of the game, I assume much later than the 16th century, is at http://www.regles.com/jeux-cartes/31.html.

But the problem I want to focus on is his argument for why the designers of the game picked 31 on Pythagorean grounds. In other words, what does he think the Pythagorean significance of the number 31 is?

Now if we want to know why the ancients made [start p. 36] thirty-one the victorious number in this game, rather than any other number such as twenty-eight, which is a perfect number, or thirty, which is the number of degrees of a celestial sign, or in some other number, greater or smaller, it should be considered that the number thirty-one is the sum of the first five numbers in double Geometric proportion, that is, one, two, four, eight and sixteen [1+2+4+8+16=31].

In this geometric progression of numbers there is a great and admirable harmony, because just as there are certain temperaments between the qualities of the four Elements in all natural things, there exists between the numbers of thirty-one great harmony, containing the [start p. 37] the Diapason [octave] four times:

Thus, it is clear that there are as many diapasons as there are Elements in Nature.

Further, it should be considered that the diapason includes in fact all the simple musical consonances, which are the Diapante, Diatesseron, Tierces and Sextes. Similarly, by adding diapasons together, one above the other, the result is always a perfect consonance – which does not happen in other consonances of music.

And as we said previously, the four elements, in the composition of all natural [start p. 38] things, maintain between them this great harmony, or else approach very closely to it.

When I first read this argument, it made little sense to me. First, what is so special about the x2 series? Well, I think I understand that part. He is saying that octaves have a special "consonance" not shared by other musical ratios. Yes, because notes an octave apart sound like the same note, but just higher or lower. It is a "perfect" consonance.

But then it sounds like he is saying that the universe only has four octaves, just like it only has four elements. But why stop at four? Can't the series go on indefinitely? I know they didn't have pianos then, but they could hear, on different instruments, the same notes, and with 75 keys and 12 notes per octave, that's over 6 octaves right there. Perhaps I have missed something. Or they didn't have instruments that went so low or high.

The other day I googled the series 1,2,4,8,16, and one thing that came up was a reference to Macrobius, Commentary on the Dream of Scipio, , II.1.24. I will quote that section in a moment. But first I need to give his definitions of a few terms (Stahl et al translation, p. 188), in sections 16-18 of that chapter:

These are only three out of six he describes. But they are the most relevant. Now I skip to section 24:

One problem is how many consonances were among the five; he only gave four; itt seems like he left one out, the octave. But never mind. First, he is saying the human ear can hear consonances only up to two octaves. Earlier, by a complicated argumenr, he maintained that above that there starts to be dissonance, But it seems like that if so it is still within the range of the human voice or ear. But never mind. The interesting part relative to Gosselin is the next sentence, about the "range of the celestial harmony". In other words, the harmony of the spheres. What is its range? If four octaves is a ratio of 16 (2x2x2x2), then then four octave and fifths would be 3x3x3x3=81. That's about 5 and a quarter octaves (64 plus a quarter of the way to 128).

But there is a translator's footnote, to explain this limit to "celestial harmony".

Because 27 was the largest number in the construction of the world-soul (see above 1.vi.46. and note), and because, according to his statement in the next paragraph, there would be four octaves and a fifth in twenty-seven and a half tones. See Proclus (Diehl) 192C, 203D.

This note says that the celestial harmony is based on a maximum of 27 tones, since it is the highest number in the so-called "Lambda" of the Timaeus's account of the World-Soul (which is what 1.vi.46 is about). That is "four octaves and a fifth", not "four times an octave and fifth". Four octaves and a fifth would be 4. octaves plus half an octave, i.e. 4.5 octaves. But how is that 27.5 tones?
The next paragraph says

So we have 6 tones in an octave and 9.5 tones in an octave and fifth. If so, an octave and fifth isn't a ratio of 3 to 1, as Macrobius had said earlier. it is a ratio of a little more than 3 to 2. Also, a fifth by itself has 3.5 tones. If so, four octaves and one fifth equals Four octaves is 4x6=24 tones. Adding a fifth, 3.5 tones, equals 27.5 tones, which is just what the footnote said it would be. In that case 4 octaves would be the maximum number of octaves capable of being sounded in the universe. If so, that would explain why Gosselin could justifiably stop at 16, the fourth octave, as he has shown by his fourfold enumeration of them. Just like the elements, of which there are only four in the whole universe, there are likewise only four octaves in the whole universe, or very close to it. Hence his conclusion:

And as we said previously, the four elements, in the composition of all natural [start p. 38] things, maintain between them this great harmony, or else approach very closely to it.

It seems to that Gosselin, or someone he read, interpreted Macrobius in the same way as the footnote. But how?

The footnote refers us to Proclus, I assume his Commentary on the Timaeus. I do not have a translation of Proclus at hand, and the libraries are closed due to the coronavirus. But I would expect Ficino to have said something about it in his Compendium, which I do have, in pdf, from chapter 20 to the end. Unfortunately, I find nothing addressing this point. The closest is the translator's comment on p. 190 that the whole Lambda is over four and a half octaves. This is not an interpretation of any passage in Ficino's text. He cites Severus, but not at a specific page. If that was common knowledge in the texts at Gosselin's disposal, that would justify his stopping his doubling at 16, i.e. the fourth octave. But where is that in a text Gosselin might have known?

#663 by BOUGEAREL Alain
Good very good try Michael.
I respect your approach.
To answer your question,I think wihout proofs for the moment that the final answer probably is also to be found in the tranmission of Pythagorism applied to harmony from Italia to France ...
The Texts about Pytjagorean theory of Celestal Harmonies available to Gosselin are the field of investigation .
See my Conclusion in the Gosselin Essay of mine
http://www.sgdl-auteurs.org/alain-bouge ... Biographie

Users browsing this forum: No registered users and 18 guests