News from Willisau and their card players

News from Willisau and their card players


It exists in the Internet a "Karnöffelzunft Willisau" (Willisau is a location near to Lucern), a Fastnacht community bewaring some older traditions. They present the opinion, that the word Karnöffel might relate to Latin "carnifax" or "carnifex", meaning "hangman" or "tormenter". From this the negative meanings of the word Karnöffel as a name for a brutal man might have developed (which looks plausible), also on a longer way the use of Karnöffel as the name for the Landsknecht appears as natural.
However, this language development also doesn't negate the possibility, that the word Karnöffel originally started as the foreign word Kanjifah, just being assimilated with the time to the meaning of a better known word with similar sound.

Interestingly, the Karnöffelzunft knows an otherwise rather unknown playing card legend, called the Heilig-Blut-Legende: At the 9th of July 1392 in Willisau three guys played with cards. Ulj Schröter, one of the three, lost all his money at that occasion. With a curse he threw his dagger against the heaven and after that 5 drops of blood fell on the table. The blasphemer is caught by the devil, the other try to clean the table without effort, finally they also die. A still existing chapel (Heilig-Blut-Kapelle) and a yearly procession reminds the bloody case.
The precise date and the related name suggest, that there was a real murderous action at the 9th of July 1392 in Willisau and probably also the involvement of playing cards in the matter refers to a true, not legendary fact at the event.

Additional note (January 2004): A request via email to the above mentioned Karnöffelzunft was replied by adding the information, that they still disguise as Karnöffel figures and I was directed to an internet page, where persons in costumes could be viewed, together - now it starts to become interesting - with old playing cards, which - according to a legend of the Karnöffelzunft - are identical to the game, that was used by the above mentioned Ulj Schröter - if legend speaks true - in the year 1392. If this information is correct, this would be the oldest existent European playing cards, so there is enough reason to doubt the validity of it.

During my research the last days about 3 card players hit and killed by a lightning stroke in Brieg in 1303, I stumbled about the following note: 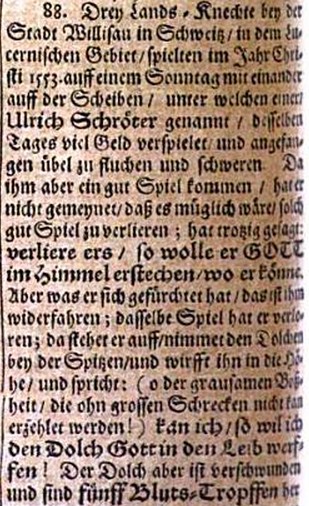 That was the same story of Willisau, though the date had changed from 1392 to 1553. And the playing cards are called "Scheyben" and some other details are added.

Curiously I studied the web. A lot of things have changed in Willisau, in relation to that what was earlier found. The Karnöffelzunft speaks of 20.000 onlookers for their carnival festivities. The Holy-Blood-legend has a video at youtube [ https://www.youtube.com/watch?v=VM5mPmSHBak ] and a theater play is staged and this project has a webpage with some historical additions:

They know about the year 1553, but they relate it to a small series of Flugblätter made around 1553, which erroneously was taken for the date of the event (and this interpretation went rather far, also to protestantic countries). Actually a chapel was build at the end of 15th century at the location of the event, which later was restored in barock times in 17th century (1674 is given). This presents 8 pictures, which tell the Holy Blood legend (I found no pictures). They present one relevant Flugblatt ...

... with a small scene of the players in the top right corner.
Huck
http://trionfi.com

Users browsing this forum: No registered users and 16 guests